Like many other natural resources, energy is not shared equally throughout the planet. A dispersion of energy consumption results in some countries using more energy. This results in questions being asked such as

For reference, the average American has a carbon footprint of 19.8 tonnes 1 while an average Chinese has an average of 4.6 tonnes of carbon emissions.

According to the Global Energy Statistical Yearbook, energy consumption grew by 2.3% due to the demand for electricity and gas in China. Because there is a higher demand for coal, global gas emissions have increased through the recent years. 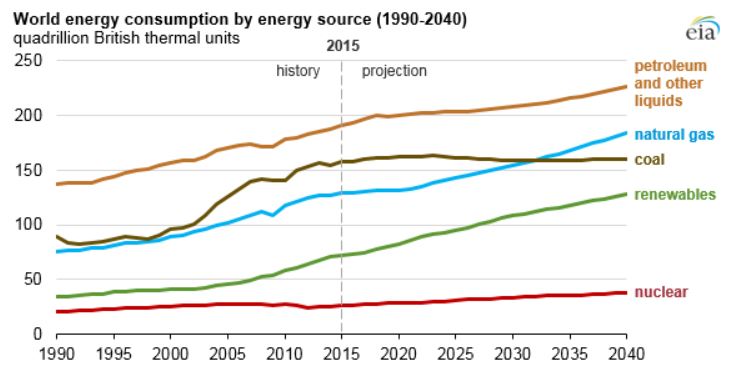 This diagram is showing the global trend for energy consumption.

China and the United States account for the increase in natural gas consumption, the abundance of supply, cheap prices and a higher energy demand allowed the US to be a top producer for natural gas.

Developing nations' energy consumption comes from biomass sources because they have a limited access to commercial energy. Commercial energy is energy that consumers need to pay for such as natural gas, coal, and petroleum.

Non commercial energy is energy that can be used at no cost by the consumers. For instance biomass is the primary source for developing nations because wood and animal waste is readily available at no cost.

Biomass energy is gathered in local areas because it is more widely available. Wood or dung is used to create energy.  Some countries that use biomass as energy include Brazil, remote locations in Africa, India and Kenya. 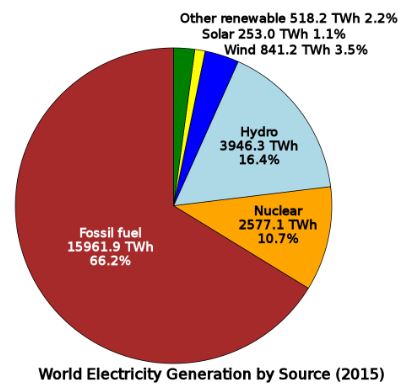 Fossil fuels is the number one producer of electricity in the world because of its affordability, abundance and accessibility.

Hydropower comes second because of the large dams such as the Three Gorges Dams. Although there has been removal of dams, there has been a focus of creating innovative tidal technology to capture energy from the movement of waves.

Nuclear Power accounts for 10.7% of energy generation because there are top industrialized countries that have the money and resources to generate electricity. The United States, France and China are some of the largest nuclear power producers. 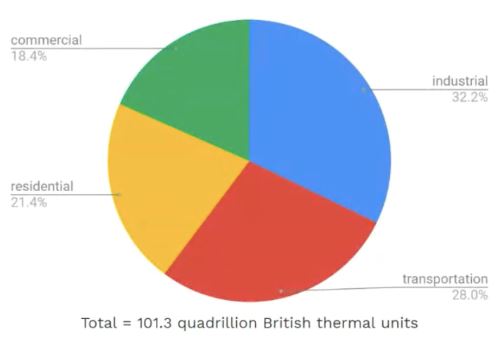 This graph shows the US energy consumption by sector in 2018.

The industrial sector accounts for the largest percentage of energy consumption because it takes more electricity to power factories. The sources of energy that are used for this sector are natural gas, petroleum, renewable sources, and coal.

The transportation sector uses petroleum(gasoline) as the main source for energy. There has been a rise in the usage of biofuels such as ethanol and biodiesel which are more environmentally friendly. 🎥 Watch: Environmental Science