The Earth is a closed system. This means that matter can never be removed or created. Instead, matter moves across the Earth in cycles called biogeochemical cycles. These basic cycles are essential for supporting life on Earth, but when they are disrupted, it can cause matter to get “stuck” or move too quickly between stages. There are multiple biogeochemical cycles: carbon, nitrogen, phosphorus, sulfur, and hydrologic!

The water cycle, also known as the hydrologic cycle, is the most basic of the biogeochemical cycles. It is important to note that water can move other chemicals and matter to where they need to be. 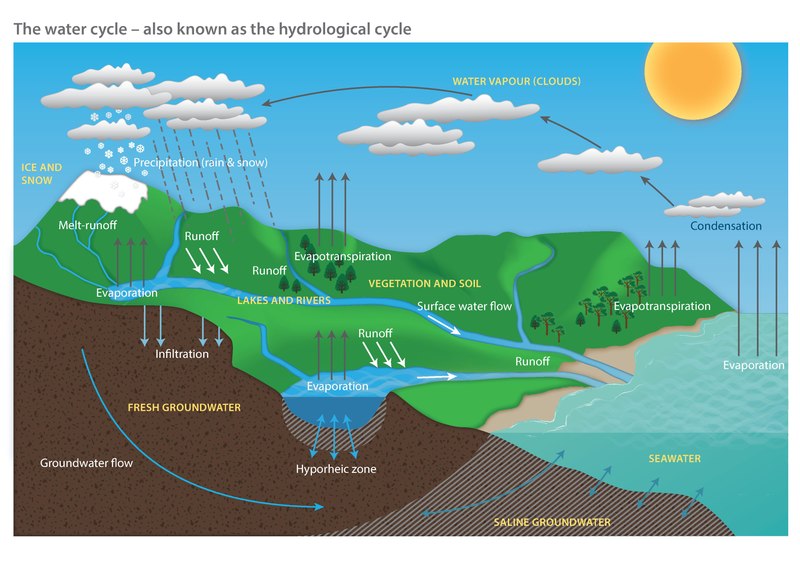 Source: The University of Oxford - The Water Module

Heat from the sun causes water to turn into water vapor and rise into the atmosphere. Water down on Earth can go back into the air in two ways: it can evaporate from a body of water or the ground, or plants can release water through transpiration. All the water that has evaporated or transpired is known as evapotranspiration.
Once the water has evaporated into the atmosphere, it comes back down to the Earth in the form of precipitation (rain, snow, etc). There are three different things that can happen when water is returned to Earth. The first is surface runoff, in which water slides from the land back into a body of water. Surface runoff doesn’t have to be immediate; snow can stay on a mountain for months before it eventually melts and returns to a body of water.
The second option is percolation. The water will be absorbed by the ground and will become part of the Earth’s groundwater stores.
Finally, the third option is that plants can uptake the water and use it for photosynthesis. Plant uptake can also occur as a secondary step after the water has been absorbed by surrounding soil or groundwater.

Human Impacts on the Water Cycle 🙌

There are many ways that humans can influence or disturb the water cycle. For example, if we clear cut a forest, there won’t be trees to uptake the water, which can lead to flooding and soil erosion.
Humans also build structures to divert water, such as dams or pipes. This can disturb the water cycle and harm wildlife who rely on the water. (We’ll look at this closer in future chapters)