What is Nuclear Energy? 💥

Nuclear energy is the process of harvesting electrical energy from the nuclear reaction through the process of nuclear fission or fusion. Nuclear energy is harvested through the use of the radioactive element, uranium.
The total supply of the world’s uranium is limited and is replaceable after it has been all used up for energy. The scarcity of uranium makes nuclear energy a nonrenewable energy source. Nuclear Energy power plants are seen more in industrialized nations that have the materials and money to extract the uranium. More money also means that more research is put in.

One way nuclear power is generated is through fission. Nuclear fission is the process where atoms of Uranium-235 are split after being struck by a neutron. Nuclear atoms are constantly being split into 2 smaller parts which in return release heat that is converted into energy. This causes a chain reaction of more neutrons being released which causes heat. 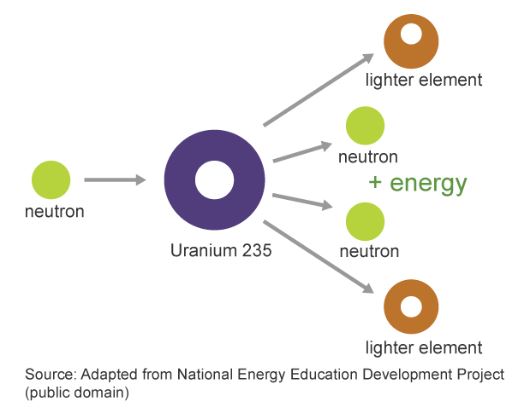 Control rods are used to control the amount of neutrons inside the reactor chain. The heat from the reaction in turn is used to boil water which will turn into steam. The steam then spins turbines that contain magnets inside, converting kinetic energy into electrical energy.

Nuclear fusion is the result of two or more smaller subatomic particles combining to form different atomic nuclei and subatomic particles. For example, in a fusion reactor hydrogen atoms combine to form helium atoms, neutrons, and release massive amounts of energy. This type of reaction most closely resembles the type of reactions that help power the sun.
Nuclear fission leads to large amounts of heat being released.

Because Nuclear power plants deal with an intense amount of heat, gases, and by products, any sort of accident can lead to damaging health and environmental effects. Some examples of nuclear accidents that can occur are meltdowns, explosions, thermal pollution, radioactive elements being exposed to the environment or people.
Nuclear energy using Uranium-235 that remains radioactive for a long time and is difficult to dispose of in a way that will not contaminate groundwater. Nuclear power generation is a non-renewable energy source because of the replenishment rate of uranium-235. It is however considered a cleaner energy source because it releases thermal pollution and hazardous solid waste instead of air pollution.