Streams and rivers have flowing fresh water. Rivers are usually wider and carry larger amounts of water than streams, although almost all streams will eventually flow together to become a river. Since the water is flowing, most of the plant matter comes from inputs from terrestrial biomes such as fallen leaves rather than algae or aquatic plants. Since these biomes have fast-moving water, they usually have higher amounts of oxygen which supports freshwater fish.

Lakes and ponds have standing freshwater, with at least some of the water being too deep to support emergent vegetation (aquatic plants that grow out from under the water’s surface). Lakes are generally larger than ponds. 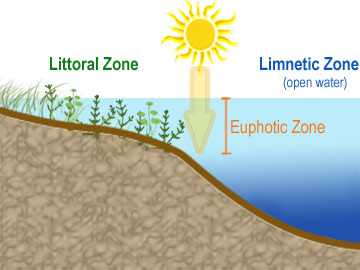 Lakes are classified by how productive they are. Oligotrophic lakes have low levels of nitrogen and phosphorus and are the least productive. Lakes with moderate productivity are called mesotrophic lakes, and lakes with a high level of productivity are called eutrophic lakes.
Lakes and ponds can be divided into several zones. The littoral zone is the shallow area of water near the shore where most of the photosynthesis occurs. The deeper open water is called the limnetic zone, which goes as deep as the sunlight can penetrate. The limnetic can’t support plants except for algae. Below the limnetic zone is the profundal zone, which is too deep for the sunlight to reach and therefore supports very few organisms. The muddy bottom of the lake is the benthic zone.

Freshwater wetlands are submerged in water for part of or all of the year, but they are shallow enough to support emergent vegetation. Even though they look nasty, these freshwater wetlands are one of the most productive biomes. They also provide essential ecosystem services: they can take in large amounts of rainwater and release it slowly to prevent flooding and droughts, they filter pollutants from water, and they give birds a place to migrate and breed.

Salt marshes are marshes that contain non woody emergent vegetation. They are often found along the coast in temperate climates. Salt marshes are often located along estuaries, where freshwater rivers meet salt water. Because these rivers carry nutrient-rich material to the ocean, salt marshes are extremely productive biomes for plants and algae. They also provide habitat for spawning marine life. 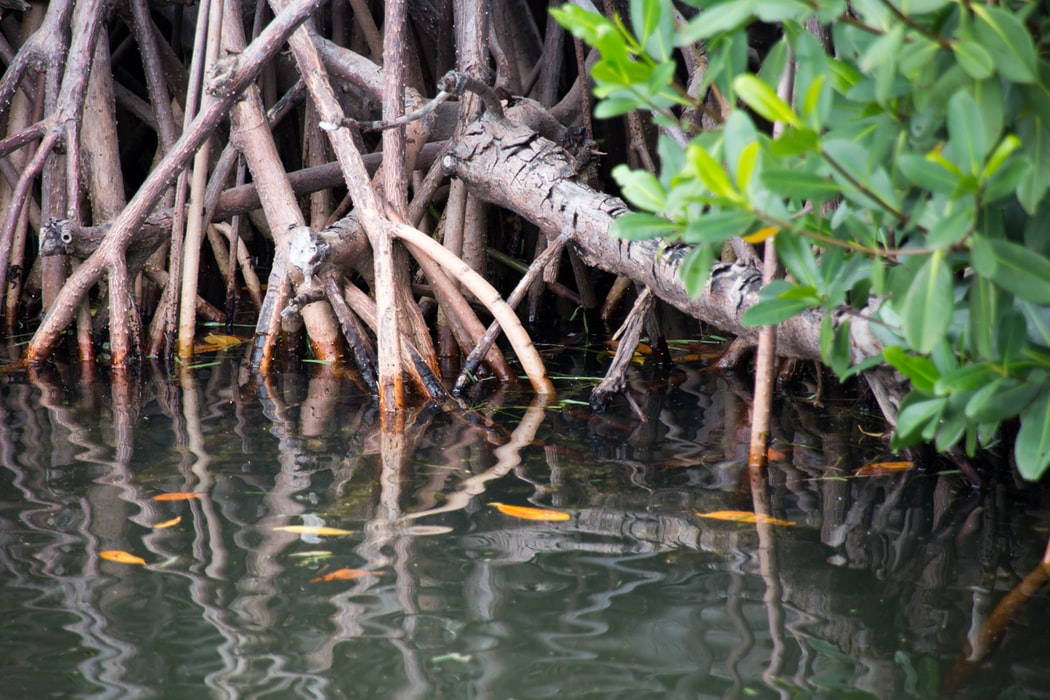 Intertidal zones are narrow bands of coastline between the levels of high tide and low tide. During high tide, the zone is submerged in water, so conditions are relatively stable. However, during low tide, the water recedes, which exposes organisms to harsh conditions. Intertidal zones are home to many organisms such as barnacles, sponges, sea stars, and crustaceans that are able to cling to their rocky surface.

Coral reefs are found in warm, shallow waters. The corals are made up of tiny animals that produce limestone to form a hard external skeleton. Corals are always found in warm, shallow waters that sunlight can penetrate because it relies on photosynthetic algae for food.
Coral reefs are Earth’s most diverse marine biome, but pollutants have created a growing problem in coral reefs. Coral bleaching is a phenomenon in which the algae inside corals die, which causes the corals to die as well. This is caused largely by a lower ocean pH and high water temperatures, which are the results of global warming.

The open ocean contains deep ocean water that sunlight cannot penetrate. The open ocean is home to several marine organisms that live within its depths.
The ocean is divided into three distinct layers. The photic zone is the layer of the ocean that sunlight can penetrate, allowing photosynthesis to occur. The aphotic zone is below the photic zone, where photosynthesis can no longer take place. Just like in lakes, the muddy bottom of the ocean is called the benthic zone.
🎥 To learn more about biomes, watch this stream.