The world is constantly changing. Biodiversity in it's three different forms is key to sustaining life in that changing world. Changes can be short or long term, anthropomorphic or natural. Organisms, be it plant or animal or bacteria or fungus, must be able to adapt to these changes or they shall perish.

There are three different forms of biodiversity: genetic, species, and habitat diversity. Each form plays a role in the survival of a population or ecosystem.  As ecosystems change, organisms must be able to withstand those changes or perish.

A variety of species in the ecosystem has the same effect. If one is wiped out, there may be another to take its place.

Finally, the world would be boring if it were all one type of ecosystem. Each ecosystem has a different species. This adds to the overall diversity of the planet.

An ecosystem’s biodiversity can be measured in its richness. This refers to how many different species inhabit the ecosystem. Species richness tends to decline with distance from the equator. This is due to climate (poles are cold).

There are a few different formulas that calculate this with the Simpson’s Diversity Index being the most common. Measurements range from zero to one with one being the highest richness. Follow the link for the explanation of how to use this equation: 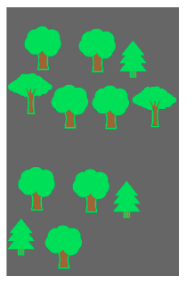 This image shows two different forests. The top has a high richness (more species) but low evenness (one species has many more individuals than the others). The bottom forest has a low richness but high evenness.