Phosphorus is really similar to nitrogen. We need phosphorus for DNA, RNA, and ATP, and it is also a limiting macronutrient. Phosphorus only cycles between land and water -- not the atmosphere. And, phosphorus doesn’t change form like nitrogen (bless up 🙌) -- it is almost always found as phosphate (PO4). 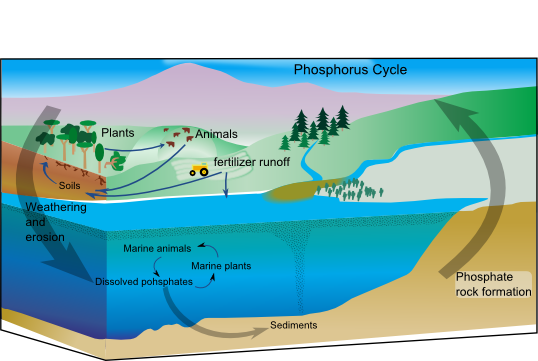 Plants assimilate phosphate, and when organisms die, fungi and bacteria mineralize phosphate and it goes back into the soil. This is really similar to the nitrogen cycle, but without all of the chemical changes.

Over time, a process called geologic uplift brings the ocean layers up to become mountains, and the phosphate rocks weather which brings the nutrient into the soil. Phosphate usually clings tightly onto soil, and like we’ve seen before, it doesn’t dissolve easily in water. Therefore, phosphate is a limiting nutrient for aquatic ecosystems.

Human Impacts on the Phosphorus Cycle🙌

Like nitrogen, phosphorus plays a big role in plant growth, so humans often add it to synthetic fertilizers. The excess phosphorus often runs off into nearby bodies of water, leading to excess algae growth that prevents sunlight from penetrating the water. The existing aquatic plants die and eat up all the available oxygen, which leads to massive dead zones in the water.

As we have seen with nitrogen, phosphorus can also alter plant communities especially in aquatic systems, causing smaller plants to die off as the larger ones grow larger.