All energy in ecosystems originates from solar energy and is then transformed and transferred as chemical energy as it moves through the trophic pyramid from producer to herbivore to carnivore and then to decomposers. When energy is converted from electromagnetic energy (light) into chemical energy this process is called photosynthesis. Energy is stored in the chemical bonds of the glucose molecule which through the chemical reactions of cellular respiration is transformed again into thermal energy and a new form of chemical energy (ATP) used by the cells.

Nothing in the universe is perfect and every time energy is transferred or transformed the process is not 100% efficient. Since energy, like matter, cannot be created or destroyed the energy is not “lost,” it changes into a less organized form which is dispersed or lost. These are described as scientific laws in physical science, in other words they are not theories that could be potentially disproven at some point. These laws are important in ecology because they explain the distribution and variety of biotic and abiotic factors in ecosystems.

The First Law of Thermodynamics

This is the law of conservation of energy. The law states in a closed system energy cannot be created or destroyed, it can only be transformed from one form to another. Like the image below, 100kcal of ice cream should get you 100kcal of kinetic energy. So why doesn’t it work that way? 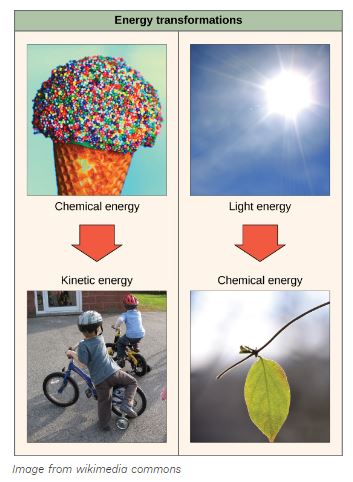 The Second Law of Thermodynamics

The second law of thermodynamics explains why your car gets hot while you drive it. It also explains why you have to keep eating food to maintain your body temperature. And more importantly it explains the 10% rule and why there are always way fewer apex predators or tertiary consumers in an ecosystem than there are primary consumers.

The second law of thermodynamics states that every time energy changes form it increases entropy. Entropy is the amount of disorder in a system. Thermal energy has the most disorder, the most entropy. Without developing your AP physics skills too much, what you need to know is that energy transformations always result in losses to waste heat.  In the case of organisms eating organisms these losses result in only 10% of the energy (on average being passed onto the next trophic level. It also explains why it is impossible to use an energy resource that is 100% efficient, which is something you will review in unit 6. 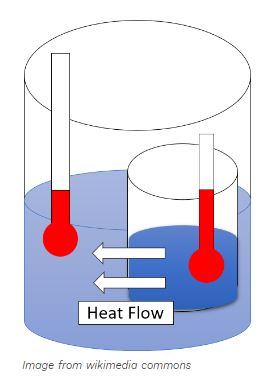 The 10% rule states that between one trophic level to the next only 10% of the energy is passed on to the next. So if producers have 10,000 J of energy stored through photosynthesis, then only 1000 J is passed on to primary consumers. You can calculate the amount of energy up and down the pyramid by moving the decimal place to the left as you move up one trophic level, and to the right as you move back down. This means that 90% is lost to waste heat. It is important to note that photosynthesis on average only captures 1% of the sun’s energy. And not all ecosystems have a 10% efficiency, it depends on the type of biome, but on average the 10% is an easy way to understand why an individual jaguar for example needs at least one square mile to support enough vegetation to feed its prey.

🎥 Learn more about Trophic Levels and the Flow of Energy Here with a Stream!