Science tells us that males and females are much more similar than they are different. At birth, we are bestowed with 46 chromosomes—23 from our mother and 23 from our father. Of these, 45 are identical in males and females. It is only in the 23rd pair that sex is assigned🧬

During prenatal development, sex is determined by the inheritance of the father’s chromosome on the 23rd pair. All embryos receive an X chromosome from their mother. From their father, the developing child will either inherit a second X chromosome or a Y chromosome. 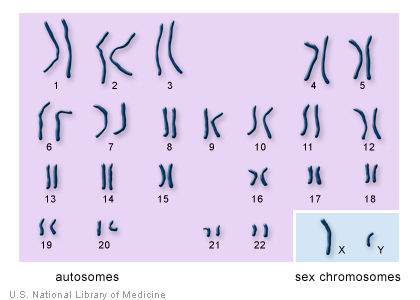 This inheritance makes all the difference. Males will be born with the XY chromosome pair, while females will be born with XX chromosome pair. The Y chromosome carries a gene which triggers the production of the primary male hormone known as testosterone.
At about seven weeks after conception, this gene will trigger the development of the testes. It is important to note that testosterone is also present in females, but in lower amounts. Around the fourth or fifth month of development, these sex hormones will also play a role in developing fundamental differences between the male and female brains.

Pubescent development features the growth of primary sex characteristics—referring to the reproductive organs and external genitalia. While typical infants are born with their external genitalia and reproductive organs intact, these features grow and develop further during puberty.
Puberty also features the development of secondary sex characteristics, which are linked to gender but are nonreproductive. In girls, this may refer to the growth of breast tissue or the widening of hips. In males, this is characterized by the growth of facial hair 🧔🏻 and the deepening of the voice 🗣️
In females, puberty will begin with the budding of breasts and development of pubic hair. It culminates in the female's first menstrual cycle, sometimes referred to as a menarche.
Technically speaking, upon her first menstrual cycle a young girl is physically able to bear a child (although pregnancies in very young women come with high levels of risk). Still, she is far from being emotionally or socially ready. In today’s more developed societies, women bear children 👶 later than they have historically.  This has been linked to a more modern push for gender equality, allowing women in developed nations to access higher education and be more career driven than they were 50 years ago. Women in developed nations also have the education and access to birth control at their discretion, allowing them to432
In various regions, females are entering puberty earlier than they have in the past. This interesting reality may be linked to our diets, increasingly consisting of high-fat foods and gender-mimicking hormones. Alternatively, it may be the result of external stressors related to disruption of the family unit.
In males, puberty is characterized by the growth of the testes, sprouting of facial and pubic hair, and deepening of the voice. Eventually, males will experience the first ejaculation and begin producing viable sperm. While both genders are likely to experience a growth spurt in pubescent years, these growth spurts are often more pronounced in males.

The process described above is characteristic of typical gender development in the prenatal environment. However, abnormalities in the inheritance of sex chromosomes or hormonal exposure can produce atypical gender development. Intersex refers to individuals who are born with either intermediate sexual organs and genitals or a combination of sex characteristics.
Additionally, gender development can be affected by other factors as well. The tragic case of David Reimer shows how the development of gender can be influenced by postpartum factors.
During a botched circumcision, virtually all of David’s penis was removed. At the advice of psychologist John Money, David’s parents decided to sexually reassign him as female. Hence, David lived a portion of his life as “Brenda” Reimer.
Although his parents and doctors attempted to raise him as a “typical girl,” problems soon arose. David never felt “right” as a female 👠 and, upon learning of his condition, decided to revert to his life as a male 👔
Sadly, David was never able to find fulfillment in either gender and took his own life at the age of 38. David’s case illustrates just how complex and intricate human gender and sexuality is.
It also should stand as a primary example of how the cases of individuals who struggle with their sexuality (whether that be transgendered persons, intersex persons, or those with varying sexual orientations) must be treated with empathy and sensitivity 😊

Sexual orientation refers to our enduring patterns of sexual attraction. Individuals who are attracted to members of the opposite sex identify as heterosexual while those attracted to members of the same sex identify as homosexual. For the most part, the majority of people identify as heterosexual across cultures.
Modern psychologists believe sexual orientation is not a conscious choice, and therefore, cannot be consciously changed. So where do these preferences come from?
While psychologists still do not definitively know, there is some interesting research that suggests a biological basis for sexual orientation. Across non-human species, heterosexuality appears to be the norm, but researchers have determined same-sex relations do occur. 🌈
Furthermore, researcher Simon LeVay found evidence to suggest there may be fundamental differences between the straight and gay brain. Correlations found in twin studies 👯‍♀️ further sustain the suggestion that there may be some sort of genetic link to sexual orientation.  In a series of well known fruit fly studies, researchers have been able to alter the fly’s sexuality by mutating a single gene. While it is true that the human brain is far more complex than a fly’s, the findings still suggest a biological link.

The free response question below is from the 2008 AP® Psychology Exam. While it is still useful practice, the format of FRQ questions has changed slightly since then.
The Smith-Garcias are planning for their first baby. Both parents-to-be have had a psychology course and are looking forward to applying the principles they learned from theories and research that address child development.
A) Summarize one main idea or finding of each of the following four researchers.
B) Provide a specific example of actions the Smith-Garcias might take to raise their child to produce positive outcomes using each of the theories below to address the corresponding psychological concept.