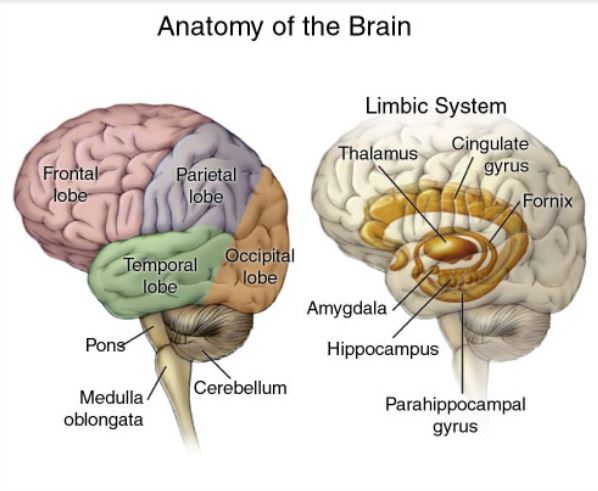 Our brain can be broken down into a variety of structures, the oldest of which is made up of the brainstem, thalamus, and the cerebellum. The brainstem gives us our most basic functions like consciousness💭 (reticular formation), breathing and heartbeat❤️ (medulla), and coordination of movement🏃 (pons).
The thalamus sits on top of the brainstem and receives and sorts all sensory input (except smell) to other parts of the brain. Lastly, the cerebellum sits at the rear of our brainstem and also processes sensory input👀, coordinated movement🚴, balance, and nonverbal learning and implicit memory🧠

Regions of the Brain

The rest of our brain is made up of higher-level cortices which make us who we are as humans🧍. The cerebral cortex is our ultimate control and processing center. There are also glial cells, which exist support, nourish, and protect our neurons. Glial cells are also believed to help in learning📚 and thinking🤔
There are also four lobes of the brain🧠:
The most important piece to understanding brain structure and function are the association areas. Association areas allow us to have higher mental functions such as learning, remembering, thinking, and speaking. Basically, anything not found in the previously mentioned cortices takes place here.

Our brain is divided into hemispheres and in order for those hemispheres to communicate with one another, we need our corpus callosum. If the corpus callosum is severed (ex. to relieve symptoms of extreme seizures), our brain still functions in a fairly normal manner.
The key difference is called “split brain.”  In a split-brain patient, both hemispheres operate independently from one another. For example, a person could be shown a separate image to each visual field. Then, when asked to draw what they have seen, each hand would independently draw a different image with the other side having no idea what was going on. 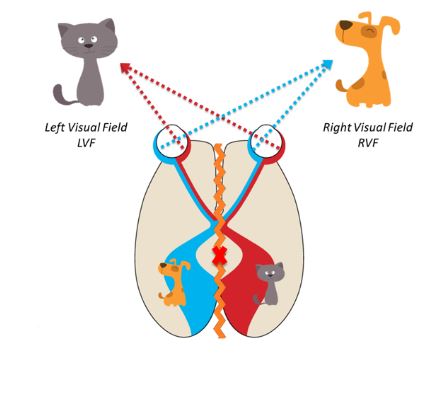 The left side of the brain corresponds to your right hand and right visual field and vice versa. Everything is opposite!!

People who study cognitive neuroscience are interested in the biological processes that create our ability to think, particularly through the various neural connections that exist in the brain.
Another interesting aspect that goes into how we think is our brain’s dual processing capabilities. We can only take in and pay attention to a few things at a time, however, that doesn’t mean we have completely missed the information. Oftentimes information is processed via an unconscious track where we may be able to access it later even though we didn’t consciously attend to it.

For visual learners👀, here is a table summing up all of the information about brain structure above:
🎥 Watch: AP Psychology - Brain and Endocrine System

Practice your typing skills while reading The Brain
Start Game