Every experiment has some sort of added stress, but how do we make sure this doesn't harm a person and is ethical? What if stress has to be added to run an experiment?
If you are doing an experiment to gather information about anxiety, you obviously have to cause anxiety, but is that right? Experiments don't work if you tell the participants what is happening beforehand, so there are guidelines set on how to deal with ethics in experimental research.

These ethical and legal guidelines provided by the American Psychological Association protect research participants from unethical practice.
The ethical guidelines on human research are:
There are a few committees that review experiments before they are conducted to ensure that these guidelines are put in place and participants are protected:

In the past, there have been experiments that are now considered unethical. With these guidelines and precautions now in place, we are hoping to avoid other experiments like the Milgram Experiment and Harry Harlow's monkey experiment.

The Milgram Experiment is a very famous demonstration showing how people will obey authority figures even when they disagree. Subjects were instructed to sit in a chair and ask a learner, who was actually working with Milgram, to list pairs of words. If the learner got it wrong, a scientist would instruct the subject to deliver an electric shock to the learner.

It was later found that this experiment had several ethical issues. The authority that the subject felt made them deliver what they believed to be fatal shocks to the learner, and they didn't stop. Thus, the subject experienced the trauma of hurting another person. Not only was the participant mentally harmed in this experiment, but they also were not informed of the true purpose of this experiment until after they participated. The participants were both harmed and deceived.

You'll need to know this experiment in unit 6, but for now here's another example of an unethical experiment.
Harlow and his wife Margaret bred rhesus monkeys 🐒 for their research in learning. To prevent the spread of infection, they began separating young monkeys from their mothers early on. These young monkeys were typically put in a sterile cage with a baby blanket for warmth. Interestingly, Harlow noticed that when the blanket was removed to be laundered, the young monkeys became distressed.
This observation contradicted the theory that attachment stems from the need for nourishment. The blanket clearly offered no food or physical nourishment to the baby monkey, but they became attached to it nonetheless. Why was this? According to Harlow, this was because of the contact comfort the blanket provided.
To test this theory, an astoundingly unethical experiment was designed. Be warned, the following experiment contains elements of animal cruelty.
Harlow created two types of artificial mothers: one was a bare wire cylinder with a wooden head and an attached bottle for feeding (yes, it was as terrifying it sounds). The other “mother” was wrapped in terry cloth and provided no nourishment. If, in fact, attachment bonds form from the infant’s need for nourishment, then the young monkeys should prefer the wire mother with the attached bottle. 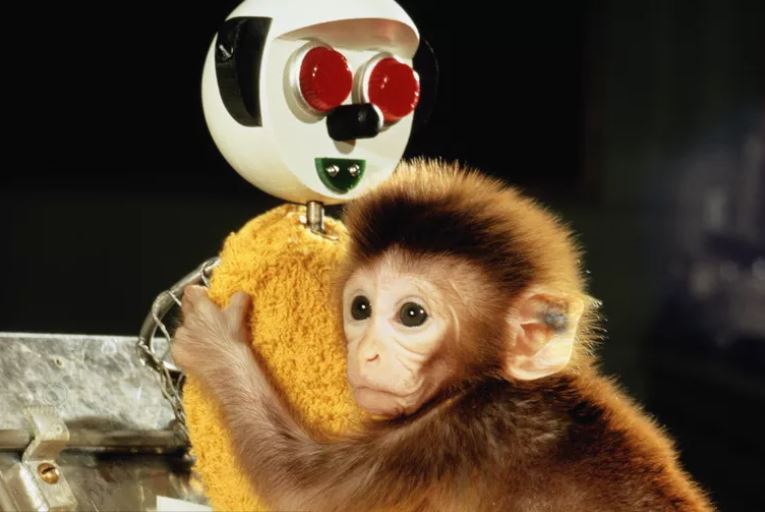 The results suggested otherwise. Young rhesus monkeys presented with both mothers overwhelmingly preferred the comfort of the terry cloth one over the wire one, despite the fact that the cloth mother provided no food.
When the babies became stressed, they would cling to the cloth mother for comfort. When exploring, they would use the cloth mother as a secure base, returning to her every so often after venturing out.
The experiments became even more unethical. Harlow began to sequester young monkeys for months or years at a time with no source of attachment or interaction—only food and drink💧 The results were troubling.
These neglected monkeys became completely catatonic and indifferent toward their environment. In adulthood, they could not properly bond or relate with other monkeys. Female monkeys could not get pregnant, since they had no interest in social interaction. Harlow had to artificially inseminate these females in order for them to reproduce.
Sadly, Harlow observed that these neglected female monkeys completely ignored their babies and neglected feeding them. In some cases, the mothers even injured or killed their babies. The implication was clear: these neglected mothers could not properly love or bond with their babies.