10.3 Interference and Superposition (Waves in Tubes and on Strings)

Interference and superposition lead to standing waves and beats.

Two or more wave pulses can interact in such a way as to produce amplitude variations in the resultant wave. When two pulses cross, they travel through each other; they do not bounce off each other. Where the pulses overlap, the resulting displacement can be determined by adding the displacements of the two pulses. This is called superposition.

Two or more traveling waves can interact in such a way as to produce amplitude variations in the resultant wave.

Standing waves are the result of the addition of incident and reflected waves that are confined to a region and have nodes and antinodes. Examples include waves on a fixed length of string and sound waves in both closed and open tubes.

The possible wavelengths of a standing wave are determined by the size of the region to which it is confined.

Beats arise from the addition of waves of slightly different frequency.

This section focuses on what happens when two waves overlap. There are two main situations that this occurs in that the AP focuses on: A wave in a string or A wave in a tube. Both of these situations are commonly seen in musical instruments such as organs, pianos, guitars, and wind instruments.

Beats occur when two waves which are almost identical to each other interfere. This leads to a large variation in the observed amplitude that repeats in a regular pattern. The frequency of the beats is equal to the difference in the frequencies of the individual waves. The lower the beat frequency, the closer the two waves are to having the same frequency. This feature is often used to tune musical instruments by ear. The image below gives a visual representation of how beats occur.

The simplest standing wave is called the fundamental. It contains 1 antinode and 2 nodes. By increasing the frequency of the wave, different standing waves can be created. These are collectively referred to as Harmonics. The chart below shows a variety of different harmonics. Notice that the total length (L) of the string remains constant and that we can use that to determine the wavelength of the wave. 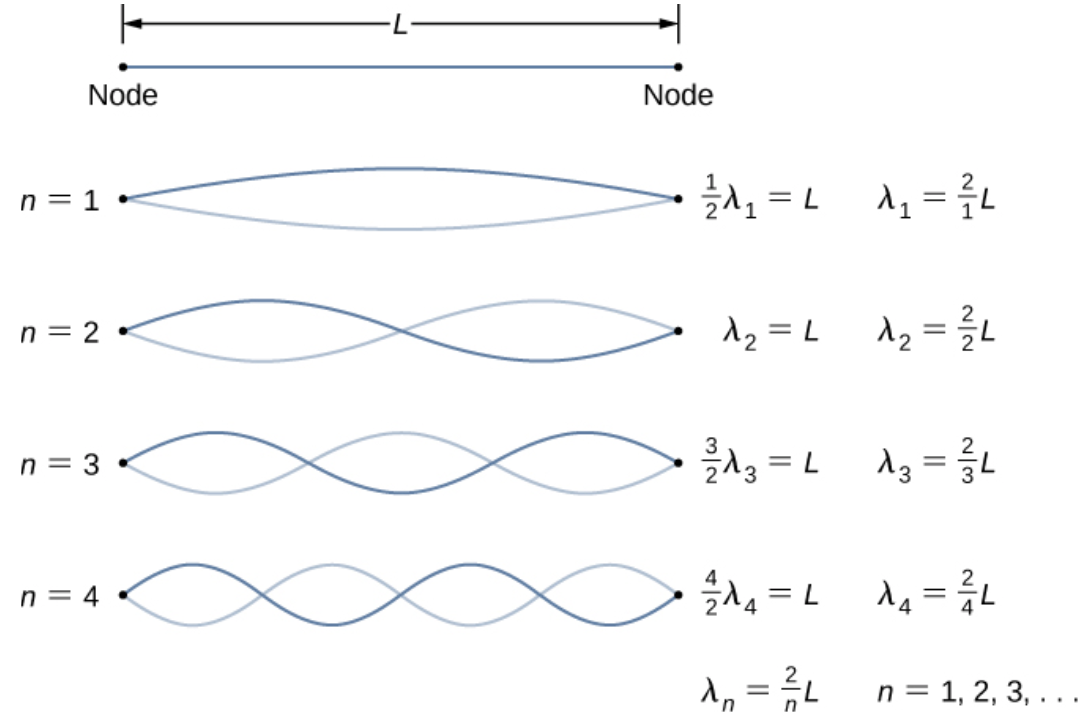 Standing waves can also form inside tubes. This is the physical basis for many musical instruments. By changing the length of the tube or the frequency of the vibrations different notes can be created. There are 2 types of tubes we need to be familiar with: Tubes that are open on both ends (Open-Open) and Tubes that are closed on one end (Open-Closed). For both of these tubes, they will produce a note (or resonate) when an antinode is present at the all of the open ends of the tube. 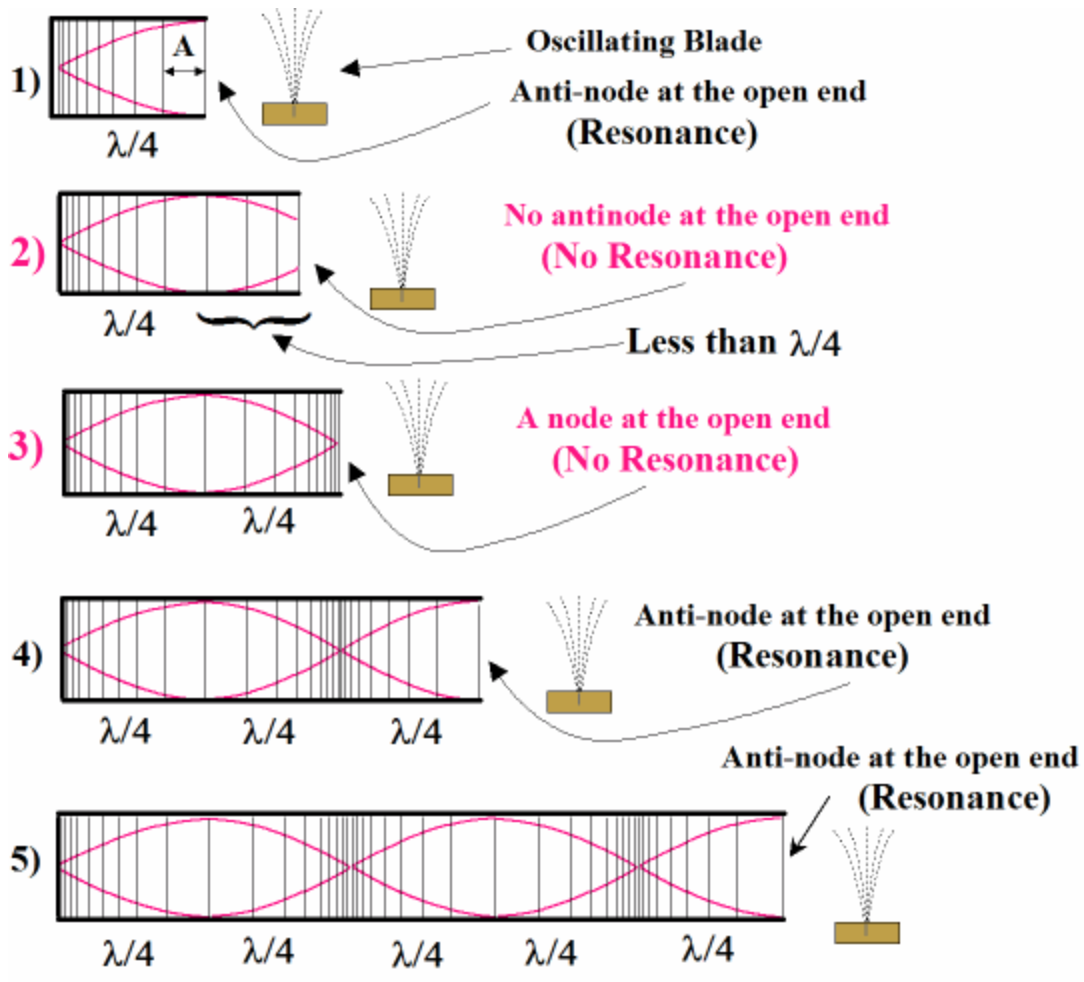 In Cases 2 and 3, the length of the pipe is such that antinode does not happen at the open end of th pipe that means "No Resonance". In each of cases 1, 4 and 5, the pipelength is an odd-multiple of:

for which "Resonance" occurs.

Since resonance only occurs when an antinode is present at the open end of the tube, a Open-Closed pipe will resonate anytime there isn’t a whole or half wave in the tube. Compare this with an Open-Open pipe in the table below that will resonate at every harmonic. 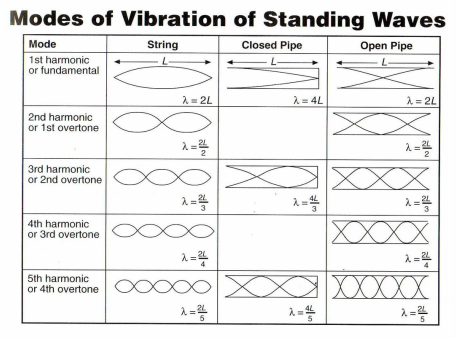 To demonstrate standing waves, one end of a string is attached to a tuning fork with frequency 120 Hz. The other end of the string passes over a pulley and is connected to a suspended mass M as shown in the figure above. The value of M is such that the standing wave pattern has four "loops." The length of the string from the tuning fork to the point where the string touches the top of the pulley is 1.20 m. The linear density of the string is 1.0 x 10^-4 kg/m, and remains constant throughout the experiment.

(a) Determine the wavelength of the standing wave.

(b) Determine the speed of transverse waves along the string.

(c) The speed of waves along the string increases with increasing tension in the string. Indicate whether the value of M should be increased or decreased in order to double the number of loops in the standing wave pattern. Justify your answer.

(d) If a point on the string at an antinode moves a total vertical distance of 4 cm during one complete cycle, what is the amplitude of the standing wave?

(b) We’re told the frequency of the vibrations is 120Hz.

A tuning fork vibrating at 512 Hz is held near one end of a tube of length L that is open at both ends, as shown above. The column of air in the tube resonates at its fundamental frequency. The speed of sound in air is 340 m/s.

(a) Calculate the length L of the tube.  (b) The column of air in the tube is still resonating at its fundamental frequency. On the axes below, sketch a graph of the maximum speed of air molecules as they oscillate in the tube, as a function of position x, from x = 0 (left end of tube) to x = L (right end of tube). (Ignore random thermal motion of the air molecules.)

(c) The right end of the tube is now capped shut, and the tube is placed in a chamber that is filled with another gas in which the speed of sound is 1005 m s. Calculate the new fundamental frequency of the tube.

(b) Since there are antinodes at each end of the tube, there must be a node centered in the tube (L/2). Antinodes have maximum velocity, and nodes have 0 velocity.

(c) This is similar to part a, except the tube is now Open-Closed. The fundamental now has ¼ of the wave inside the tube so the L=4λ.