The British introduced opium to the Chinese society through open trade. Opium was produced in British controlled India and to avoid selling it to Europeans, they sold it to Chinese merchants. The Chinese government attempted to stop the sale, but failed during an attempted blockade of British ships from their ports. These failed attempts were the starting point of the Opium Wars and as a result, the British opened embassies and more ports in Beijing. 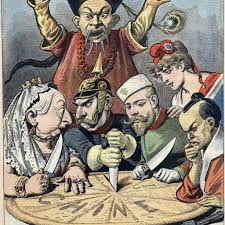 The British dominated India through the East India Company. The Company had a paid army through profits of the Company that invaded and took over local governments who would not cooperate with British trade. Eventually, British India dominated the Mughal Empire. The British brought western customs and values to the largely non-white, non-Christian Indians, some of which was not well accepted. The Sepoy (name for Indian troops) Rebellion broke out over mistaken religious differences between Indian and British soldiers and a difference in their pay. The result of this conflict is Great Britain officially establishing control over the former Mughal Empire in 1858.

The Scramble for Africa during the Berlin Conference of 1884-5 divided the continent of Africa into colonial holdings for European countries. Great Britain and France dominated the negotiations over resources and access to ports. Other European nations involved were Germany, Portugal, Belgium, Italy, and Spain. The resources and advantageous geographic locations, including harbors and ports, were divided among the European countries without any regard to the Africans currently living there. Europeans would siphon resources from Africa until territorial rivalries broke out before and during WWI. After the Treaty of Versailles, most colonial holdings will be released.

Social Darwinism was used to justify imperialist endeavors and racism or discrimination toward other races or religions.
Europeans used the Civilizing Mission to bring advanced science, medicine, economic, and governmental developments to non-Western areas of the world. Most Europeans believed their societies were the most advanced of the world, and it was their duty to bring these enlightened ideas to native populations of non-Western areas. (See White Man’s Burden)
Eurocentrism developed as a complex that the majority of Europeans believed in. This belief basically claimed that Western society, government, economics, religions, and any other aspect of life was superior to other institutions around the world, so it was their responsibility to spread their influence.
Diplomatic Tensions arise between European nations in colonial holdings. One good example of this was the Moroccan Crisis of 1905 in which Germany supported a Moroccan Independence movement in French Morocco to diminish the French influence in Africa.
🎥 Watch: AP European History - Imperialism