Covalent: Sharing of electrons (Molecule created by two or more atoms in a covalent bond). A single bond (sharing one pair of electrons) in a structural formula is represented by one line connecting two atoms. A double bond is the sharing of two pairs of electrons. A structural formula is represented by two lines connecting two atoms. Electronegativity is the atom's attraction for electrons in a covalent bond. Examples: methane (CH4), carbon monoxide (CO), and iodine monobromide (IBr). 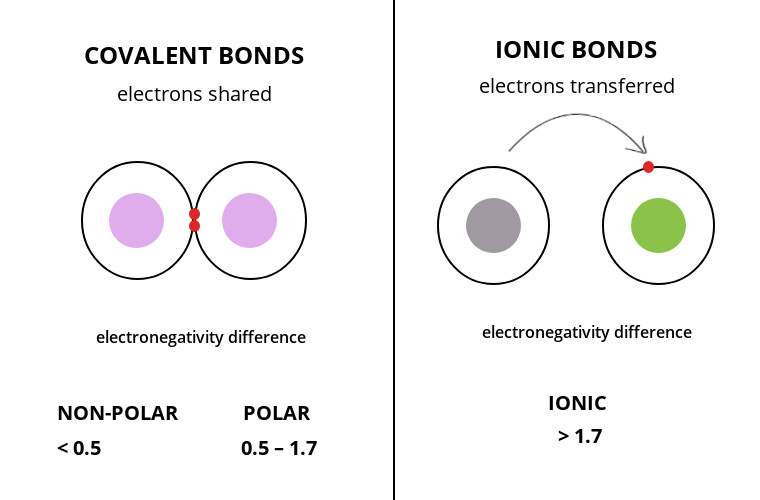 Polymer: a long molecule composed of many molecules bonded together covalently. (composed of multiple monomers) (Poly-many). Out of the main biological macromolecules, lipids, do not usually form polymers.

Monomer: are small building block molecules that, when combined, make a polymer. (mono-one)

Nonpolar Covalent bond: the equal sharing of electrons and distribution of charge (smaller electronegativity differences as seen in the figure above).

Polar covalent bond: Unequal sharing of electrons and distribution of charge causes partial positive or partial negative for each atom or molecule (higher electronegativity differences as seen in the image above).

Dehydration Synthesis: occurs when monomers combine to form a polymer through a reaction after water is removed (dehydrate - water lost). One monomer donates OH- and another monomer donates H+ forming H20. It is a condensation reaction, requires energy (endergonic) and enzymes, and builds complexity (anabolic).

Hydrolysis: occurs when polymers are broken down into monomers through a reaction due to the addition of water (hydro - water, lysis - break) (Digestion). It uses H2O to break down the molecules splitting into H+ and OH-. Releases energy (exergonic) and requires enzymes. Reduces complexity (catabolic). 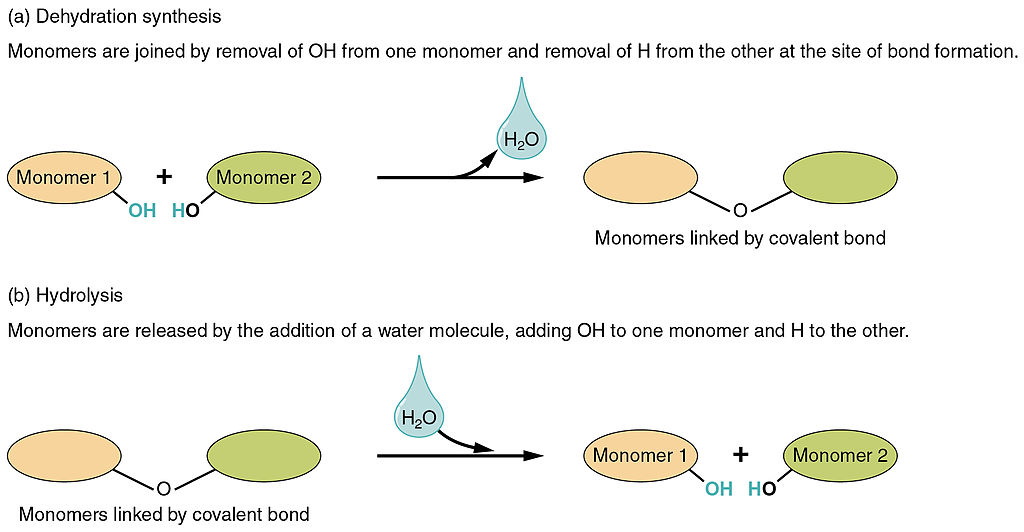