Solids and liquids are frequently combined to make solutions.

Solutions form when one substance disperses uniformly throughout another. The attractive interaction of solvent molecules with solute is called solvation.

When the solvent is water, the interaction is called hydration. In essence, solutions are a kind of mixture. While solids dissolved in liquids are probably the most common type of solution, it is not the only type. Actually, every phase of matter can serve as either the solute (thing being dissolved) or the solvent (thing doing the dissolving). 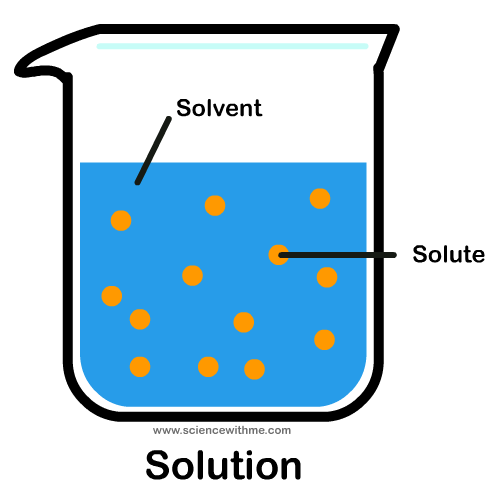 What is a Mixture?

This image may help you understand the difference between a heterogeneous and homogeneous mixture: 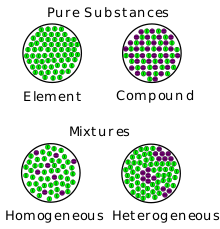 When discussing solutions, we usually refer to concentrations of a solute dissolved in a solvent. There are tons of ways to calculate concentration, but the most important and most commonly used form of concentration is molarity (M).

Molarity is formally defined as the number of moles of a solute dissolved in 1 liter of solvent. Thus, the formula for molarity is M = moles of solute/liters of solution, or mol/L. For example, if we have a solution that contains 24 moles of HCl dissolved in 2L of water, the molarity is 24/2 = 12, or 12M HCl as is commonly written.

Note that moles is only of the solute while liters is both the solute and solvent, which together are the solution.

There are other ways of calculating concentration such as percent by mass and molality, but those won't be tested on the AP Exam. Let's go over it anyways just in case you pursue chemistry past this course (otherwise you can completely skip this section)!

There are a few steps to forming a solution and each requires a certain amount of energy.

Sometimes, the first two steps can even be skipped. 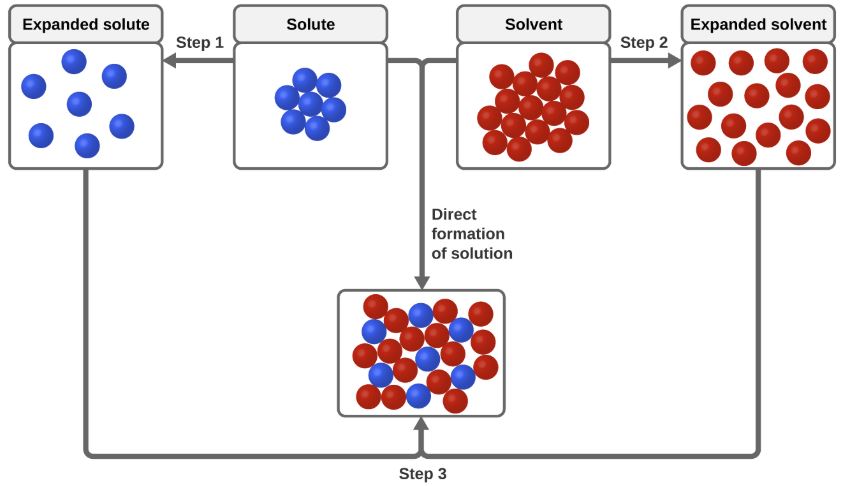 Decreasing the concentration of a solute in solution is called diluting the solution. When we dilute a solution we have two options: remove solute or add solvent. Typically, removing solute is either completely impossible or difficult to control. Imagine having to accurately remove a certain mass of salt🧂 from a collection of salt water. It's essentially impossible! So, chemists often simply add solvent to the solution to get a lower molarity. Why does this work? Well, recall the definition of molarity: M = mol/L.

If we lower the moles of solute, of course M will get lower, but similarly, if L increases, M will increase too! Thus, adding solvent will lower concentration.

How does this work?

You can just plug in the numbers and easily get any value you are solving for🥳!