Long-run aggregate supply is defined as the number of goods and services that an economy is capable of producing with the full employment of resources.

In the long run, wages and resources prices are flexible. When price level increases, wages will increase by the same amount.

The long-run aggregate supply curve (LRAS) is vertical at full-employment. YF represents the quantity of output the society can produce when they are at full employment and at the natural rate of unemployment. 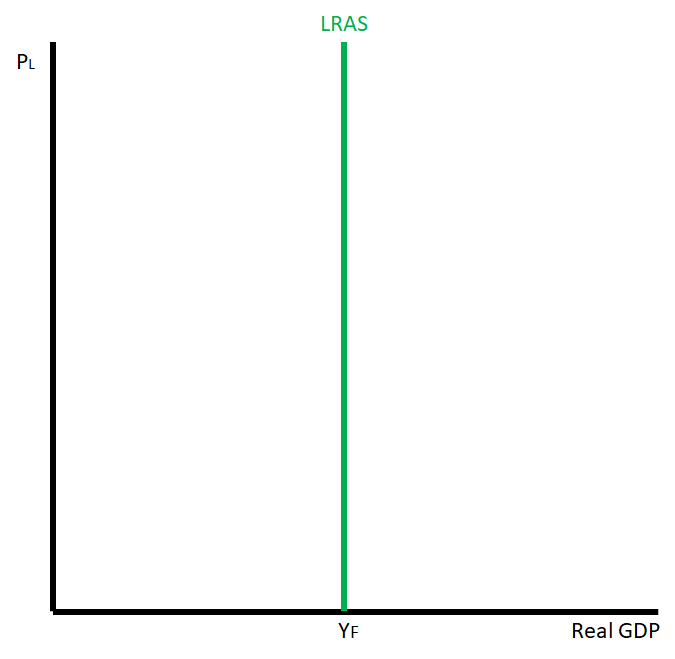 The LRAS shifts anytime a situation would cause the production possibilities curve to shift. The difference between a change in the SRAS and LRAS is that we are looking at changing the potential output of an economy with LRAS and not the actual output at the time, as we do with SRAS. The shifting of the LRAS happens when there is a change in:

💡If the LRAS Curve shifts left, an economy's capacity to produce decreases.

A change in the number of resources that could impact the LRAS includes a change in:

Some examples or scenarios in this category that could increase the LRAS include:

A change in the quality of resources that could impact the LRAS includes:

When we see greater investment in schools and job training facilities, it allows us to have a workforce with more productive skills. When new technology is developed that makes certain resources more productive, we are able to increase our potential output.

Examples of this could include better ways to access our resources, such as items like fertilizer and chemical pesticides that lead to a greater yield of certain goods. When we develop technology to improve our capital resources than we also see an increase in LRAS. If the deterioration of a country's infrastructure or its educational system occurs, that can cause a decrease in potential output for the economy.

Also, when there are policy changes within an economy, we can change our potential output. A lot of times these policies are created within the different levels of government. For example, if the government enacts policies that provide large incentives to find a job, then we see an increase in the size of our workforce which in turn increases our LRAS. Another example could be the government giving tax incentives to invest in capital or technology, which also causes our potential output to increase.