Fiscal policy is the way by which the government can manipulate the nation's economy. They do this in two ways:

Lags or delays can sometimes occur with the discretionary fiscal policy because it takes time to decide on and implement a policy that will help the economy. Non-discretionary fiscal policy refers to permanent spending or taxation laws already on the books that help regulate the economy. This includes things like social security, welfare, and unemployment compensations.

Fiscal policy is mainly used to correct the economy when it is either in a recessionary gap or an inflationary gap situation The government has to decide whether to use government spending or taxation to correct the situation. This depends on the difference between where the economy is currently producing and what its potential output is. This will also be affected by the multipliers which are impacted by the marginal propensity to save and the marginal propensity to consume.

Let's look at a particular situation. What if the economy is currently in a recessionary gap and is producing $150 billion of real GDP but has a potential output of $200 billion real GDP? The government has to decide whether to use government spending or taxation to correct the economy. They are charged with closing the gap of $50 billion (see graph below). 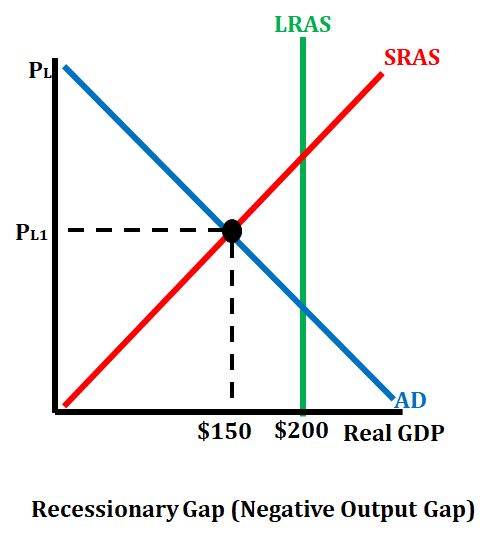 In order for the government to help this economy correct itself back to the long-run, it needs to decide the level of government spending or the amount of adjustment in taxes it needs to make. The goal is to shift aggregate demand to the right in an effort to bring it to where it connects SRAS and LRAS at the same GDP level. Since the government is trying to correct a recessionary gap, they need to increase spending or decrease taxes. The question becomes how much do they need to increase spending or how much do they need to decrease taxes. This is where the spending and tax multiplier is helpful in determining these values.

If we said that the MPC was .5, then that means that the MPS is also .5. If you remember from section 3.2, MPC + MPS always equals 1. The spending multiplier is calculated by dividing 1/MPS. So in this particular situation, the spending multiplier would be 2. This means that for every dollar the government spends, it will multiply twice in the economy. Since there is a gap of $50 billion than the government could correct this economy by spending $25 billion.

Since the MPC is .5, we would calculate the tax multiplier as .5/.5 (MPC/MPS). This would make the tax multiplier 1. So in order to correct this particular economy, the government would have to decreases taxes by $50 billion (the entire value of the gap).

In a situation like the one above where you are trying to encourage spending to close a recessionary gap, government spending will lead to more total spending than a decrease in taxes, because households could potentially save a portion of a tax cut while government spending converts to direct spending into the economy.

💡You can apply this same process on an inflationary gap situation except that the government would want to decrease spending and increase taxes.