The bureaucracy is a large and complex system of administration consisting of appointed officials. It features a hierarchical authority structure, job specialization, and established rules and procedures. The Bureaucracy implements, administers, regulates policies, issues fines, and testifies before Congress. It has Commissions, Departments, and government corporations to carry out its duties.

The Cabinet consists of fifteen departments heads. These are headed by Secretaries (except for the Justice Department, which is headed by the attorney general), who are appointed by the president and then must be approved by the Senate. Examples include the Departments of State, Treasury, and Defense.

The independent regulatory agencies, such as the Securities and Exchange Commission (SEC) or the Federal Trade Commission (FCC), are constitutionally part of the executive branch, but operate fairly independent of presidential control. Most independent agencies are run by commissions of between five and seven members who share power, but the president has the power to name some of the commissions' members.

A government corporation is a government organization that provides a service that could be provided by the private sector. It typically charges for its services and runs like a business. The Postal Service is an example of this because its job can be done by companies in the private sector like UPS, and the Postal Service charges for its services.

An iron triangle is the term used to describe a relationship that develops between congressional committees, the federal bureaucracy, and interest groups during the policy creation process. The relationship between these three groups occurs naturally over time due to the close proximity in which all of them work together, as they are all seeking to maximize their gain during the policy process. 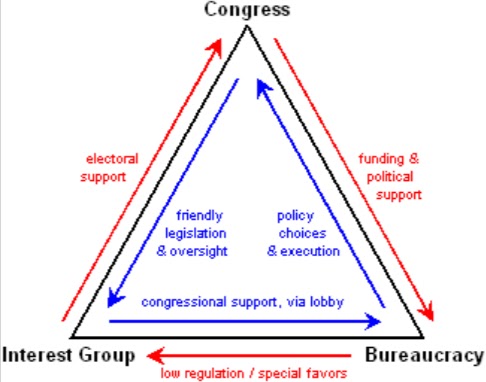 Issue networks are networks that consist of people in interest groups, on congressional staff, in bureaucratic agencies, in universities, and in the mass media who regularly debate an issue. 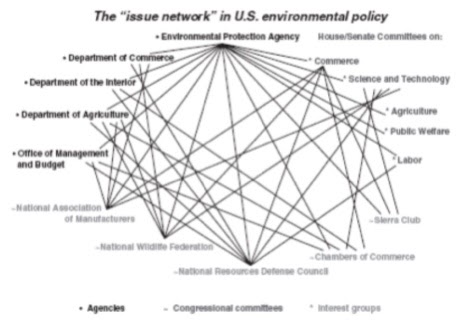 The spoils system is when politicians grant favors, give contracts, and/or making appointments to office to their friends, supporters, and relatives. The merit system is a system of public employment in which selection and promotion depend on demonstrated performance rather than political patronage, this is the system used today.

The Pendleton Act and Hatch Act are examples of reforms made in civil service. The Pendleton Act (1833) is a federal law established in 1883 that stipulated that government jobs should be awarded on the basis of merit.

The Hatch Act (1939) is federal law prohibiting government employees from active participation in partisan politics while on the job. The act forbids federal workers from taking part in partisan political activities, however, they are still allowed to vote in elections.

The Office of Personnel Management (OPM) is the bureaucracy’s employment agency. The OPM administers the Civil Service Exam, publishes lists of job openings, and hires on the basis of merit. The intent of the OPM is to create a competent and professional bureaucracy.

Merit Systems Protection Board investigates charges of agency corruption and incompetence. The board also protects whistleblowers. The Whistleblower Protection Act of 1989 was enacted to protect federal employees who disclose "government illegality, waste, and corruption" from adverse consequences related to their employment. This act provides protection to whistleblowers who may receive demotions, pay cuts, or be replaced as an employee.