Great Britain, France, Russia, Belgium, and Germany saw the largest economic impacts of WWI. Nations were forced into a war of attrition. The new fighting style and weaponry of WWI caused extensive damage, more than any previous European war.

The expensive nature of the war forced nations into debt. The United States offered loans to its European allies during the war, expecting them to be paid afterwards. The Treaty of Versailles placed war reparations on Germany totaling 132 billion German marks (around $33 billion). This, coupled with their personal war debts, forced Germany into a period of hyperinflation when they were forced to print more money to cover their debts.

The US, under the direction of Charles Dawes, developed a plan in which the US would loan Germany money to pay off its debts. In return, the other European nations could pay off their debts to the US. 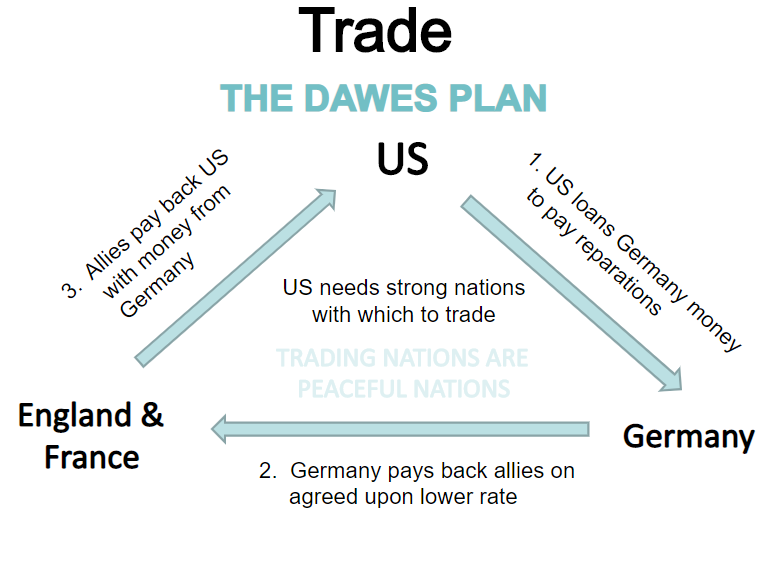 In the United States, WWI had been an economic boom. Industry was more productive and the workforce had expanded in the wartime economy. This led to the outbreak of a consumer economy in the 1920s. Part of this consumer economy led to people investing in the stock market with expectations of making money. However, they didn’t invest the full amount required.

Most were buying on the margin: meaning they were only paying 10-20% of their investment and taking a loan out for the rest. When stock prices reached a peak, many began selling their stocks. As the DOW dropped after one day, a frenzy began and people started selling stocks quickly. The problem? People had only invested 10-20% of the cost. If they don’t make money, they can’t pay their loans back.

When banks began closing and the US Stock Market crashed in 1929, the US was unable to continue participating in the Dawes Plan and the Great Depression began, then exacerbated the hyperinflation already occurring in Europe.

The extreme poverty that existed in Europe led to the rise of authoritarian leaders. People feared for their lives, their futures, and the futures of their nations. Men who had military backgrounds made strong speeches with rhetoric that matched the anger and frustrations of their populations, and promise to fix all that is wrong with their countries start gaining popularity in Italy, Spain, Germany, and even Russia.