4.4 America on the World Stage

Build-up to the War

Impressment remained a big issue for America. British ships would take American crew as their prisoners, impressing them into the service of the Royal Navy. It violated American neutrality.

Orders in Council forbid neutral ships from trading with Britain’s enemies, and France retaliated by stating that all ships trading with Britain or following Orders will be seized. As a result, American ships were also seized by the French. Both violated US sovereignty and free trade rights. 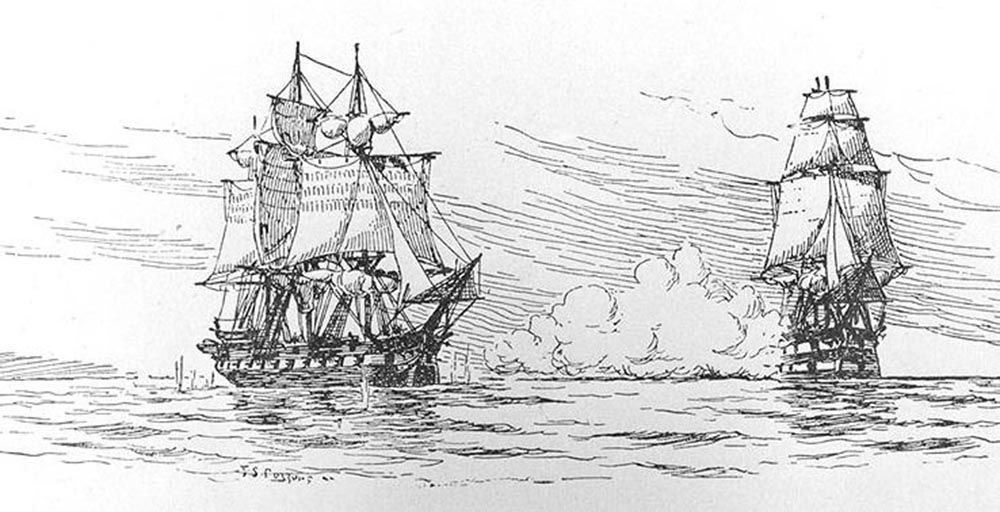 The attack of the Chesapeake caused such furor in the hearts of Americans that even eighty years after the incident, an artist sketched this drawing of the event. Fred S. Cozzens, The incident between HMS “Leopard” and USS “Chesapeake” that sparked the Chesapeake-Leopard Affair, 1897. Wikimedia.

The Chesapeake affair occurred in 1807 when a British warship, the Leopard, attacked an American warship, the Chesapeake. With three sailors killed and four others forced into the British navy, Americans demanded war, but Jefferson responded with “peaceful coercion.” Basically, the idea was that if the two countries refused to respect the rights of the neutral US, the US would keep its ships at home.

Jefferson’s answer was The Embargo Act, which prohibited all American overseas trade. Jefferson wanted economic pressure to force British to change, but this plan backfired. It had worked to an extent, but Britain found new sources instead. It actually led to disaster for America, backfiring on Jefferson.

The British had little difficulty substituting supplies from the US with ones from South America. The effect on the American economy was devastating, especially for shipbuilders in New England. Jefferson would call for its repeal in the final days of his presidency.

America successfully negotiated with Britain on impressment, but it took too long for the news to reach the US. Congress had already declared war by the time the news reached them. Major causes of the War of 1812 (which actually lasted until 1814) were:

America failed to invade British Canada, and Britain blocked the American coast, which hurt the American economy. Britain became successful in invading Maryland. In Baltimore, at the famous Battle of Fort McHenry, Francis Scott Key penned the words of the Star Spangled Banner as the fort held out against the bombardment overnight.

The British then marched into the capital with little opposition. In response to Americans burning the Canadian capital of York (Toronto), the British burned the White House and Capitol building.

Andrew Jackson defeated the British in the Battle of New Orleans. The peace treaty had already been negotiated, but due to the speed of communication, it was not realized that the war was already over. Jackson became a national hero.

The Treaty of Ghent, ending the war, did the following:

So basically, nothing was won out of the war.

The war did show that America was competent enough, allowing European nations to take America more seriously. Both Jackson and Harrison became national heroes due to their leadership roles in the military. It also stimulated manufacturing in America.

In 1814, a group of New England Federalists gathered in Hartford, Connecticut. They recommended the following changes to the Constitution:

However, shortly after the convention, news spread of Jackson’s victory and the end of the war, which stamped the Federalists as unpatriotic and further weakened them.

One of the three key principles of the Monroe Doctrine stated that America would stay out of European wars unless directly impacted. Also, European nations would not make any new colonies or attempt to take back control over former colonies in the Americas. Last, America would count any European colonization attempt in the Western Hemisphere to be an “unfriendly act.”