4.10 Consequences of Centrifugal and Centripital Forces

A great way to remember the difference between these forces is: centrifugal- forces people farther apart, centripetal- pulls people together.

Sovereignty is initially achieved because the people of a region are linked by common characteristics. This is called a centripetal force, which unifies people within a state. Some examples include a shared religion, external threats, a stable government, and a common language.

For example, national holidays bring people together and enforce the cohesion of the group. Other shared traditions around religion, clothing, food, and language can also unit people. These forces are what keep countries together despite the differences that arise and the size of the state. In the United States, there are a lot of things that divide us, but we also share a common history, democratic values, and national identity as Americans. No matter how heated political debates can get, these keep us together.

The breakup in Yugoslavia led to the formation of several new states that were pulled together by centripetal forces. The Croatians had a shared history, language, and religion that differentiated them from the Bosniaks, which resulted in two the formation of two states rather than just one.

But, the forces that pull as a part are just as strong. The forces that pull people away from each other are called centrifugal forces. Common examples are differing religion or languages, an unstable government, internal conflict, and geographic features that physically divide people (mountain ranges, etc.). 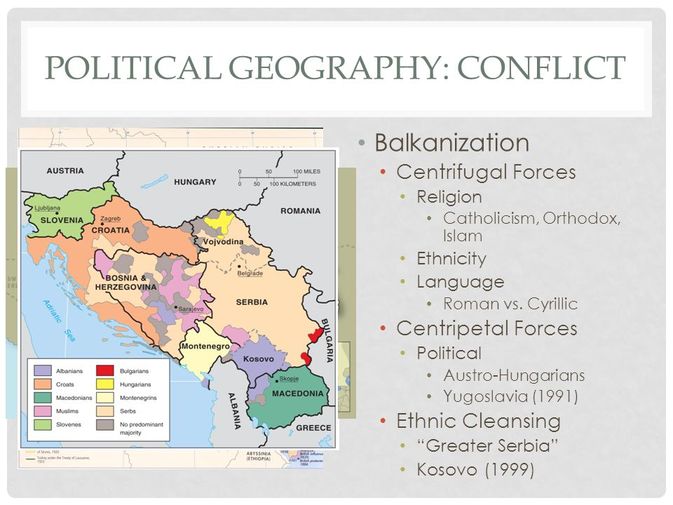 For example, when India became independent from Britain, the forces that divided the Indian people were strong because of the differing religions of Islam and Hinduism. As a result, there was mass conflict between these groups and eventually a two-state solution was adopted, but tensions still continue between India and Pakistan.