A Continuation of Mercantilism

Mercantilist policies of the time maximized exports and minimized imports so a state could have more silver and gold on hand. These policies forced colonies to only import goods from their colonizer.

The changes in economic policy and increased trade led to innovations in finances, business, and banking.

The worldwide transformation into a trade-based economy using gold and silver is known as the Commercial Revolution, which had four main causes:

As a result of increased trade and mining, prices also increased across the board. This is also known as the Price Revolution. As prices increased, more people went into debt, which was a recipe for revolution in the upcoming century.

To keep up with the new global demand, joint-stock companies were formed. These minimized personal risk as investors pooled money into ventures. It was kind of like an early form of crowdfunding. Rather than one investor risking everything if a ship was destroyed, many investors could split the risk thereby increasing the number of new businesses.

The Dutch were high rollers in this time and played a main role in finance. They established a stock exchange and developed an international currency to facilitate trade. These financial innovations created enormous wealth for the Dutch.

France and England were not as financially stable. Investors were rapidly buying shares based on speculated costs that increased as demand increased. When a large number of these investments failed to return profits, many investors went bankrupt which had rippling effects on the economy. 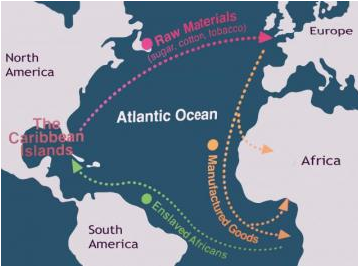 Effects of the Atlantic Slave Trade

The explosion of the slave trade seriously weakened African kingdoms that had been on the rise before this time. For example, the Kongo was in decline. Slowed population growth also weakened economic production.

Because of this, economic development in Africa was stalled for centuries and these regions were left vulnerable to the imperial conquest of Europeans. Without the slave trade, African kingdoms would have continued to strengthen and could have prevented centuries of turmoil in the region.

Some African rulers were complicit in the slave trade. They would kidnap slaves and trade them to Europeans in exchange for wealth and guns, which made local rivalries far more violent.

Most kidnapped slaves were men, which left a gender imbalance in favor of women, especially in Ghana and Benin. As a result, practices of polygamy were more common.

Ultimately, the exchange of new food staples increased the population of Africa, but in parts of West Africa, the population suffered as people were taken.

The most immediate effect on indigenous communities was the massive depopulation caused by disease. Native Americans did not have biological immunity to the common diseases brought by Europeans like smallpox and typhoid. These diseases killed up to 90% of the population.

Spanish and Portuguese influence spread across politics, economics, and society in the Americas. Spanish viceroys were appointed to rule each region in conjunction with audiencias (royal courts).

Most of the native literature, art, and languages were completely destroyed, which left very few primary sources from before 1450. The decimation of lands and peoples made it difficult to preserve this history. The languages of Spanish and Portuguese became the dominant languages of the region.

Finally, a new elite class emerged called the creoles. These were people of Spanish or Portuguese descent that were born in the Americas. They were not quite as powerful as Peninsulares, people born on the Iberian peninsula, but had far more powers than any mixed person, Native American, or African slave.

New syncretic religions emerged that blended native and colonial traditions. Syncretisms happen everywhere, but in the Americas there are quite a few examples.