The Squeeze Theorem (or Sandwich Theorem) is used on limit problems where the usual algebraic methods (factoring, conjugation, algebraic manipulation, or trig identities) are not effective. 🥪

With the Squeeze Theorem, we are trying to find two functions that are 1) similar enough to the original function that we can be sure the squeeze works and 2) easier to evaluate their limit as x → a. The theorem utilizes the statement “If two functions squeeze together at a particular point, then any function trapped between them will get squeezed to that same point.”

So, in order to use the squeeze theorem on a limit, we just have to find functions similar enough that all three functions squeeze together at a particular point like the image below. 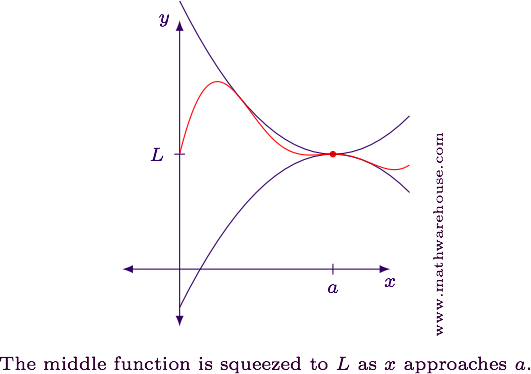 If you’re confused, take a look at an example problem using the Squeeze Theorem.