This topic focuses on the ability to manipulate a limit in order to solve it. Usually, this involves factoring and dividing common factors of rational functions or using alternate forms of trigonometric functions. You can find example problems for all algebraic manipulations below.

At first, you might want to plug in infinity because that is what we learned earlier in the unit. However, because you have variables on both the top and bottom, you’ll get infinity over infinity. 🧐

As you can see from the example problem, the other powers don't matter because they’re all going to disappear. The “other powers” in the example above would be (-3x + 1) in the numerator and (x - 12) in the denominator. Because they aren’t the highest power in the limit, they won’t affect the eventual limit as much as the highest-powered term. As a rule of thumb use the following rules when evaluating limits the limit of a rational expression as x approaches infinity. 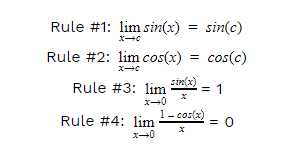 To better understand these formulas, let’s discuss them individually.

These two rules are pretty much the same as what we would do for any limit. The first way to solve a limit is to plug in the x value into the function. In the formulas above, the value “c” is being plugged in to try and determine the limit. If you are asked to find the limit of sin(x) as x approaches 1, then you simply plug in 1 and get your answer.

This rule is VERY common in AP Calculus. Moving forward, you should be on the lookout for this rule.

This last rule is not as common as rule #3 but it's still just as important. To understand this rule, look at the example below. If you’re asked to evaluate the following limit, you can use this rule.

Because sec x = 1/(cos(x)), you can use the following steps to solve the limit.