Relocation Diffusion occurs when people move from their original location to another and bring their innovations with them. Immigration from country to country, city to city, etc. As they relocate to a new location, they bring their ideas, cultural tradition such as food, music, and more. As masses of individuals immigrate to a new environment, they bring along their cultural connections, influencing others in the new environments. Relocation diffusion can also be forced rather than chosen.

Many cultural components of Southern US architecture, cuisine, and music have African and Caribbean origins due to the forced relocation and enslavement of African people during the trans-atlantic slave trade.

Another example is the cultural diffusion from when over two million persecuted Jewish people fled Eastern Europe between 1881 and 1914 to live in Britain or the United States.

Expansion Diffusion is the spread of an idea through a population where the amount of those influenced grows continuously larger. There are three sub-types of Expansion diffusion: Stimulus, Hierarchical, and Contagious.

Hierarchical Diffusion is when an idea spreads by passing first among the most connected individuals, then spreading to other individuals. Think of the chain of command in businesses, and the government. There’s somewhat of a hierarchy in terms of position of authority.

Stimulus Diffusion is when an idea diffuses from its cultural hearth outward, but the original idea is changed by the new adopters. Almost all cultural diffusions will have some aspect of stimulus diffusion because of the ways culture adapts to new environmental, social, and political conditions.

Maladaptive Diffusion is the adoption of diffusing traits that are not practical or reflective of a region's environment or culture. 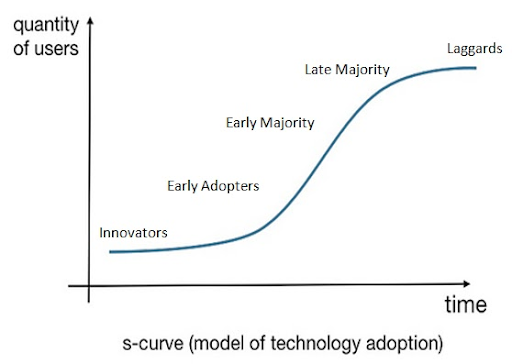 This image depicts the Diffusion S Curve by Hagerstrand specifically in the model of the adoption of technology. The stages include innovators, early adopters (small groups of those that can afford), followed by majority adopters (faster rate of adoption once price decreases) and lastly laggards/late adopters (rate of adoption slows down). The trend resembles the letter S therefore is called an S curve.

Watchlist: Fiveable Reviews on the meaning of cultural diffusion and the definition of culture

🎥Watch: What is Culture

"What is Culture" Key Questions:

🎥 Watch: AP HUG - All About Diffusion

"All About Diffusion" Key Questions:

Practice your typing skills while reading Types of Cultural Diffusion