Exchange and Trade in the Indian Ocean

The Indian Ocean became the largest sea-based trade network in this time frame. I know we tend to think of the Silk Roads and luxury items being sold when we picture trade routes. However, the bulk of actual trade happened on the Indian Ocean. The Indian Ocean traded “regular goods”, in bulk and at a lower cost. Why could bulk goods be carried on water, you ask? Simple. It’s much easier to carry huge quantities of high-demand goods (such as timber) on water than on a camel’s back on land. A couple of these goods included timber, frankincense, ivory, and sandalwood.

Obviously, the biggest difference between this trade and the Silk Road was that it occurred on the sea. This meant they faced all kinds of unexpected obstacles, like unpredictable wind patterns, monsoons, etc. In fact, knowledge of monsoon winds (when they blew at what times) was huge in making Indian Ocean trade happen. Once sailors could utilize where the monsoons were blowing at what times, they could make those winds blow their sails to wherever they wanted to go!
Of course, sailing presents its own unique obstacles. But as always, technology helped people through! Improvements of maritime technologies like lateen sails (the first triangle-shaped sails, allowing ships to be far more maneuverable), dhow ships and the astrolabe (an instrument that vastly increased accurate navigation by measuring the stars), helped sailors navigate safely and consistently throughout the Indian Ocean. 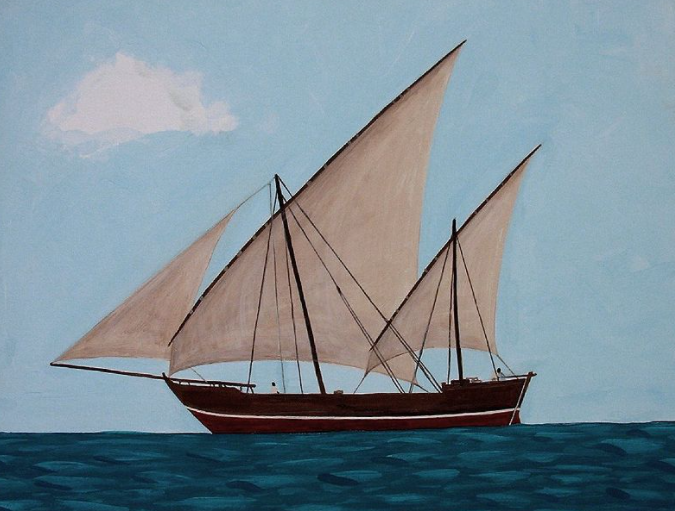 🎥Watch: WHAP - Sailing the Oceans in the Late Middle Ages

Effects of the Indian Ocean on Trade

The two major effects of the Indian Ocean are the 2C’s-- community and contact.
🎥Watch: WHAP - CCOT-Indian Ocean Exchange
Communities: Diasporic communities were set up by merchants  to introduce their own cultural traditions into other cultures. A couple key examples are Arab and Persians in Eastern Asia, Chinese merchants in Southeast Asia, and Malay communities in the Indian Ocean basin.
On a more consolidated note, states formed from the Indian Ocean trade on the edge of the water. Along the Swahili coast, city-states not far departed from the Greek ones of yore formed and grew rich from trade, along with the state of Gujarat in India and the sultanate of Malacca. The last one is particularly key-- Malacca, being an island forming a very thin strait in between itself and East Asia, controlled this strait and became incredibly wealthy, since Chinese merchants often had to travel through it to get to the riches of the Indian Ocean Basin.
Contact: As all trade networks did, the Indian Ocean trade fostered the exchange of ideas, such as Buddhism to Southeast Asia, and Islam across Eurasia. Additionally, many famous travelers such as Marco Polo, Ibn Battuta, and eventually Ming Admiral Zheng He utilized these key routes, and their records would soon spread to much of the world.
🎥Watch: WHAP - Indian Ocean Trade