2.2 Structures, Powers, and Functions of Congress

Delegated powers require both houses of Congress to work with each other. These powers are the powers to:

Powers Unique to One Chamber

The House of Representatives can only initiate tax laws and spending bills. Thus, the House Ways and Means Committee oversees taxing and spending legislation. The Senate can only amend revenue bills.

Some of the Senate’s unique powers include confirming president nominations to federal courts or ambassadorships to foreign countries, confirming members of the president’s cabinet, and ratifying treaties signed by the president.

Congress performs oversight through committees and subcommittees to review the work of executive agencies which provides a check on the executive branch. Congress investigates corruption and waste and also calls on experts and citizens to testify at hearings to discuss the government’s problems and provide solutions. All of the committee chairs have the power to legally compel witnesses to appear and testify.

The legislative process is slow by design which prevents Congress from acting hastily. The framers intended that this would allow for compromises to be met, but in reality final versions of bills are vastly different from the initial versions.

Bills can be written by members of Congress and their staff or the executive branch and are introduced by a member of Congress. They can also be suggested and written by interest groups and their attorneys.

It doesn’t matter who authors a bill, but only a member of Congress can introduce it and the member who introduces the bill becomes its sponsor.

The legislative process allows for both the House and Senate to work with each other and the bills must be in exactly the same form when they pass both houses. The debating and voting processes in both Chambers differ because of the size of their memberships.

Rules in the House of Representatives

Since the House of Representatives has 435 members the process of debating bills is limited. The Senate only has 100 members, so there are relatively few rules governing it.

The House Rules Committee has been considered one of the most powerful committees in the house because it controls crucial aspects of the legislative process. The Rules Committee can kill a bill by delaying a vote, allow it to be easier for opponents to add poison-pill amendments, or bring the bill up for an immediate floor vote.

Time allotted for debating the bill in question is split equally between its proponents and opponents. The committee cannot itself pass legislation but may debate and propose amendments.

Important Roles in the House

Here are some more key figures:

Important Roles in the Senate 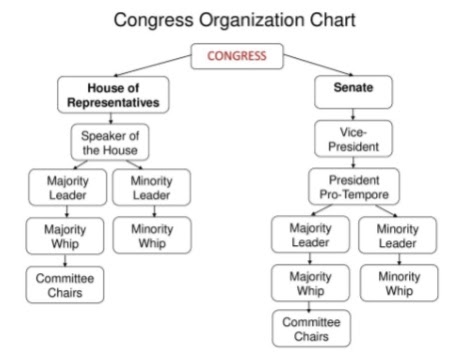 Rules in the Senate

A debate in the Senate does not have a time limit, so senators can debate for as long as they want.

A filibuster is a tactic used to delay a vote on a bill and tie up the work of the Senate, because a senator makes a speech that continues for hours on the Senate floor. The only way to end a filibuster is to vote for a cloture. A cloture requires votes from 60 members to end the filibuster.

Earmarks are provisions within legislation that appropriate money to a specific project in appropriations and authorization bills. Logrolling is when two legislators agree to trade votes for each other’s benefit.

Pork barrel legislation is the use of federal funding to finance localized projects, typically bringing money into a representative’s district in order to please constituents and boost the representative’s chances of winning reelection.

The Standing Committee is a legislative panel with full legislative functions and oversight responsibilities. The members become experts in their respective topic and examples of committees include  the Appropriations Committee (sets specific expenditure for the federal government) and the Armed Services Committee (oversees military and defense).

Select Committees are temporary committees with limited purposes in areas like investigation.

The conference committee tries to negotiate a compromise bill that is acceptable to both the House and Senate. When a compromise version of the bill has been written, the bill goes to both houses for a vote, and if passed in both houses, it goes to the White House for the president to sign it.

If a president takes no action and sits on the bill and Congress adjourned before the ten-day period ended, the bill becomes pocket vetoed. When a bill is pocket vetoed it must go through the entire legislative process again.