Light exists as both a particle and a wave. Einstein observed the photoelectric effect as light in its particle form.

The photoelectric effect demonstrates that electrons are emitted from a metal surface when light strikes it if the frequency is high enough✨.

Photoelectron spectroscopy (PES) is a method to compare the relative energies of atoms, ions, and molecules.

PES uses energy from electrons emitted through the photoelectric effect to provide insight about the electronic configuration of a sample.

How Does it Work?

When light of a certain frequency shines upon a sample, a limited number of electrons are emitted. The released energy reflects the energy or energy levels within an atom.

Here is a diagram putting all of these concepts together: 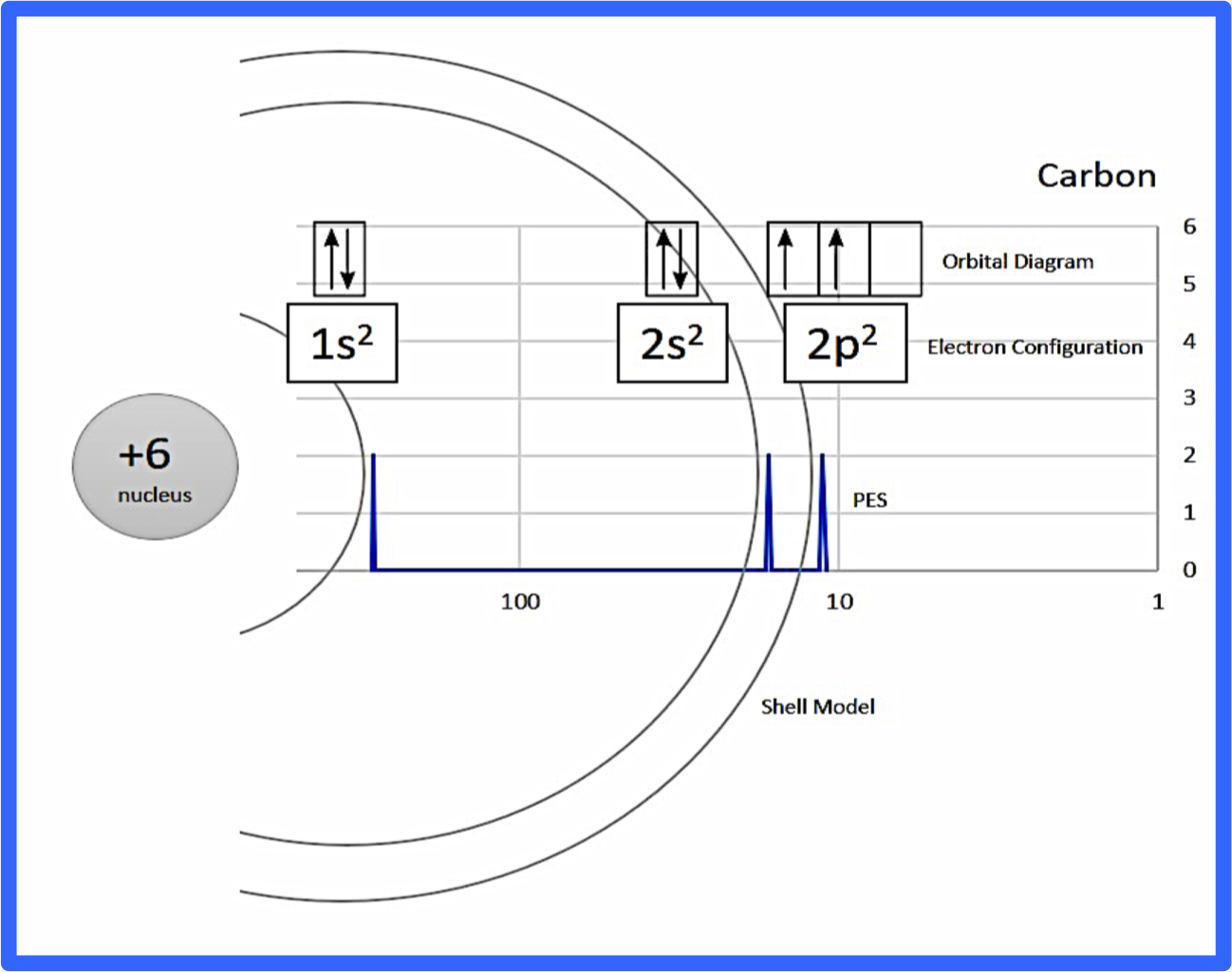 Here is a PES of Carbon without the markups. Let's dissect it. 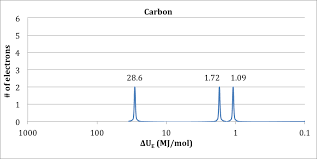 The closer an electron to the nucleus, the greater the ionization energy since the attraction between the negative electron➖ and positive nucleus➕ is the strongest.

This information should be able to tell us which side the nucleus is on in this diagram. It's on the left side, since the binding energy is greatest there (1000>0.1). So let's read the diagram from left to right.

The first orbital, as always, has to be 1s. Since the graph goes up to 2, there are 2 electrons in the 1s orbital.

The next orbital has to be 2s and the PES indicates there are 2 electrons in this orbital.

So far, the electron configuration seems to be 1s^2 2s^2.

There is one more peak though, which corresponds to the 2p orbital. However, this orbital isn't filled to maximum capacity, there are only 2 electrons in it.

The full electron configuration of this element is 1s^2 2s^2 2p^2. If I didn't tell you that this PES was for carbon, you should be able to guess it given the graph.

The next two questions are taken from a quizizz that kkehesci created.

2. Which peak shows electrons closest to the nucleus? A, B, C or D?

The answer to #1 is C, Core electrons of an atom experience a much higher effective nuclear charge than valence electrons. This goes back to the concept that electrons closest to nucleus have a higher ionization energy/binding energy.

The answer to #2 is peak A. This goes back to that same exact concept. If asked about which peak corresponds to the energies of the valence electrons, you should say peak D.

This question is taken from the AP Chemistry Exam from 2019. 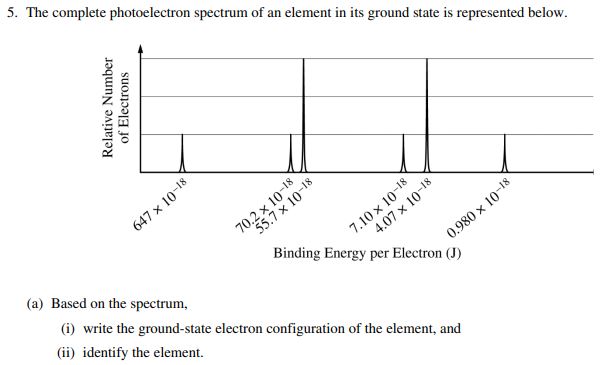 In part a, they are asking you to simply write the configuration and identify the element. We just did this a few times! If you feel comfortable with this, try it on your own first before looking at the answer.

Since the binding energy is largest on the left, the peak on the left is the 1s orbital. The electron configuration is:

You could use the noble gas shortcut here as well, but I often leave the electron configuration like this when given a PES.

To identify the element, just pull out your periodic table! You should get Ca.