Join us on May 2, 2021 for the 🌶️ AP Physics C: Mechanics Cram Finale for a last minute review to get all your questions answered!

It's that time of year again. You're picking courses for next year and you see AP Physics C: Mechanics and AP Physics C: E & M in your course catalog 🤩 You've heard from other students that they're some of the hardest classes offered 🥴, but you aren't really sure how true that is. We're here to help you 🥳

AP Physics C: Mechanics is the first of the two AP Physics C courses and deals exclusively with Newtonian mechanics 🍎 Much of the work deals with the motion of various objects and will take the form of long word problems. Many of them will also ask you to draw a free body diagram of the forces on objects ➡️ The multiple-choice will be more conceptual than the long problems but will still contain math for many of the problems as compared to AP Physics 1 and 2. 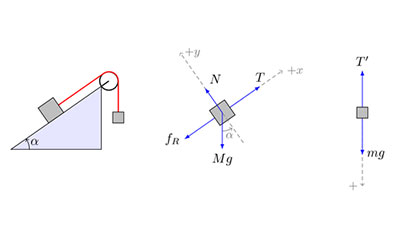 Free Body Diagrams similar to the type you will draw on your assignments and the AP Test. Image Courtesy of CK-12

AP Physics C: Mechanics is usually the easier of the two AP Physics Cs; however, there are still problems that make you question your existence, especially with complex dynamics and rotational motion questions! Don't let your guard down ✊🏼
You can take other AP classes along with AP Physics C: Mechanics. To be successful, you should go into the course after already taking AP Calculus AB ♾️ as a prerequisite. AP Physics C: Mechanics will be your hardest AP course and should not be taken with any other of the AP sciences (except E & M).

AP Physics C: E & M is the second of the two AP Physics C courses and deals with electricity, magnetism, and the relationship between the two, called electromagnetic induction ⚡ Many problems will explore the concept of field forces (forces that don't necessarily have to touch the object) and will ask you to derive a formula when given a specific scenario.💡 The multiple-choice assignments will be more conceptual than with Mechanics. 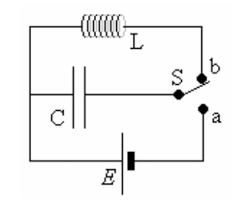 A LC circuit, which is one of the types of circuits studied in AP Physics C: E & M. Image Courtesy of University of Louisville Physics and Astronomy

AP Physics C: E & M is rightfully the harder of the two AP Physics C courses because of its conceptual nuance and the complex derivations, most of which require integration 😳 This course is done best with a prerequisite or corequisite of AP Calculus BC. This course will require a lot of work to be put into mastering the material, so stay on top of your assignments and studying 💪🏼

Are AP Physics C: Mechanics and E & M Worth Taking?

AP Physics C: Mechanics and AP Physics C: E & M are the first two courses in a calculus-based physics sequence at most universities 🏫 Unlike other AP subjects, these two give college credit most of the time for these two courses and fulfill general education requirements at many schools 🖊️
If you intend to go into a medical field, medical schools are looking for two semesters of calculus-based physics which can be fulfilled by these two courses 🏥
For many STEM majors, these two courses are prerequisites for many other courses, especially in engineering. Mechanics will be a prerequisite for many mechanical and civil engineering classes, such as statics and dynamics. E & M will be a prerequisite for many electrical engineering classes as well as higher topics in physics such as computer architecture and quantum physics.
Due to the versatility of this credit, we think that these two are definitely worth taking 🙌

Yes, AP Physics C: Mechanics and E & M are two of the hardest courses offered in high school, but it's totally worth it! Remember, you're not alone in this—join a Fiveable course today to be part of an inclusive community. You got this 🎉

💪🏽 Are you ready for the Mechanics exam?

Thousands of students are studying with us for the AP Physics C: Mechanics exam.
join now