3.5 The Kinetic Molecular Theory of Gases

The Kinetic Molecular Theory describes the behavior of ideal gases♨️.

💡Fun Fact: two gases that behave the most ideal in the real world are H2 and He because they are really small and non-polar particles. PLIGHT [pressure low, ideal gas, high temp] are the conditions of temperature and pressure when gases behave most ideally. We'll learn more about that in the next key unit!

If you recall from the last key topic, temperature is directly related to average kinetic energy. Therefore, as temperature increases, the gas particles move faster.

The Average Kinetic Energy of a gas particle can be calculated by using the following equation:

There are four main properties to the Kinetic Molecular Theory (KMT):

Boltzmann diagrams can be really tricky to read because they can be extremely misleading at times. When you see a really high peak on a Boltzmann distribution, that does NOT mean that at that temperature particles have more energy, rather it means that a higher NUMBER of particles have that energy. Taking a look at an image of a few distributions may help: 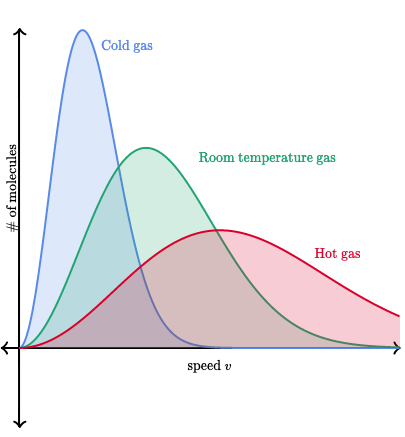 Here we have three distributions: one gas that is cold, one gas that is at room temperature, and another that is hot. At first glance, the cold gas might seem to have the highest speed, but take a look at the axes.

On the x-axis, we have the speed (and energy, since KE = 1/2mv^2) and on the y-axis we see the number of molecules. This means that that high peak for the cold gas means that a large number of gas particles actually has a slower speed. Looking at the hotter gasses, we can see more molecules having a faster speed, and thus more energy.

💡Remember: The Maxwell-Boltzmann Distributions show that as temperature increases, the range of velocities becomes larger and that particles move at a higher speed. If the diagram were to have curves that represent different types of gases instead of temperatures, as the element gets lighter, the range of velocities becomes larger. You should correlate particles at higher temperatures🌡️ with having the same curve as a light gas.

That's all you really have to know for AP Chem! This is more of an AP Physics topic so just remember that one fact and the diagram and you're good to go.

The following question is from the 2019 AP Examination, number 4 on the FRQ section.

A student is doing experiments with CO2(g). Originally, a sample of gas is in a rigid container at 299K and 0.70 atm. The student increases the temperature of the CO2(g) in the container to 425K.

Working through a gas law FRQ, it is good to note what information you are given:

The first part is asking you to describe something, so we have to write 1-2 sentences describing the phenomenon using knowledge we know.

As you can recall, raising the temperature increases the speed of the molecules and we should always use the phrase "average kinetic energy" in our answer.

Sample Response: As you increase the temperature, or the average kinetic energy, of the CO2(g) molecules, the speed of the molecules increases as well.

The second part is asking you to calculate something, so we will have to use any equation we learned about so far to find a missing piece of information.

The question is asking you to calculate the final pressure after the experiment has occurred. This question is really simple once you look at the information we were given and noted down at the beginning!

Since we know that the volume is fixed, or constant, we can eliminate it from the equation and use P1/T1 = P2/T2, which is really Gay Lussac's Gas Law.

On your AP Exam, it would be good to show the original formula, the substitution, and the final answer with units (which is what I bolded) for full credit and an amazing response.

The third part is asking you to explain, so there should be a few sentences.