2.0 Overview of Unit 2: Networks of Exchange

Before 1200, trade networks were largely local, usually between civilizations bordering each other. However, with more technological inventions allowing merchants to travel farther more efficiently, and the growing demand for goods in growing empires, trade routes began to rapidly expand.
As the routes (such as the Silk Roads) began to spread, they carried new goods and ideas with them, such as Buddhism and the development of diasporic communities where merchants settled down in different states other than their own. Knowledge began to travel faster than ever before.
🎥Watch: WHAP - Traveler's Tales from the Late Middle Ages 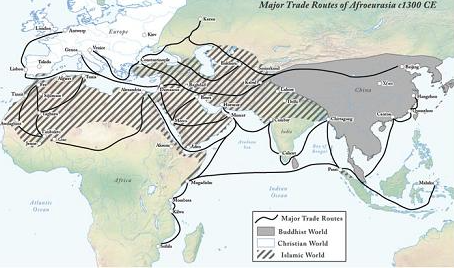 Here's a map of the Major Trade Routes to keep in mind throughout this unit!