3.6 Deviations from the Ideal Gas Law

When Do Gases Deviate From The Ideal Gas Law?

In the real world, gases don’t always behave as defined by the Kinetic Molecular Theory. Conditions of high pressure and low temperature will cause gases to deviate from ideal gas behavior for the following reasons:

Gas particles can become attracted to each other➡️⬅️

When the gas particles are close together due to a large number of particles, this can cause more attractive forces. At low temperatures🌡️, gas particles move slower and spend more time around each other.

At a high pressure, as shown through Boyle's Law, the volume of the container gasses are kept in decreases. When volume decreases, the volume of gas particles begins to be more significant. This can be shown visually:

This graph shows how when you increase pressure, gasses pretty quickly deviate from the Ideal Gas Law:

When we increase the pressure, PV/RT, which should equal one (PV = nRT, and with 1 mol of ideal gas, PV = RT), but these gases deviate from one.

While the traditional ideal gas law has been shown to have certain exceptions, chemists have created new equations to correct for intermolecular forces and for volumes that become significant. This is called the Van der Waals equation:

Woah! That equation looks really scary, but there are few things you need to know about this equation🥳:

In the last key topic, we went over the first 3 parts of #4 on the 2019 AP Chemistry Exam - FRQ Section. Now that we know about real gases, we can answer the 4th question:

This is what we just went over, and it all has to do with pressure and attractive forces!

Sample Response: The attractive forces between CO2(g) molecules result in a pressure that is lower than that predicted by the ideal gas law. Since the particles are attracted to each other, they aren't colliding with the walls of the container as often as ideal gases with no attractive forces would.

Diffusion describes the mixing of gases. There are a few rules that you should memorize: 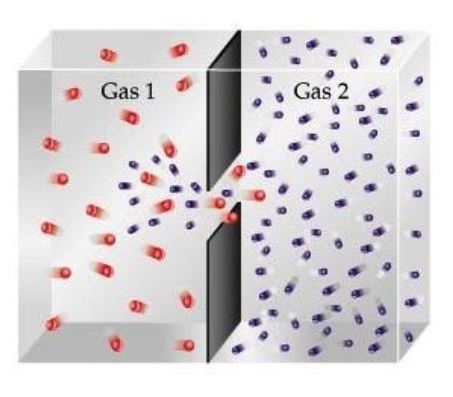 Image Courtesy of Ideal Gas law and the KMT

Effusion is very similar to diffusion, but it describes the passage of gas through a tiny space into a vacuum space. Basically, the gases are flowing from a space with higher pressure to a space with lower pressure through a pinhole. 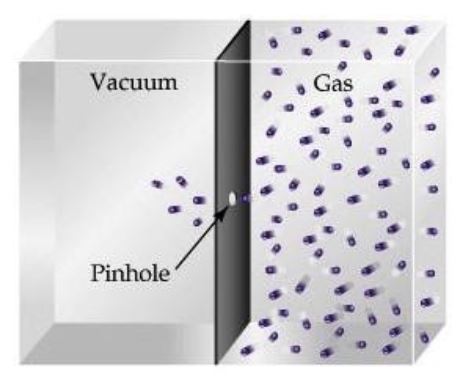 Image Courtesy of Ideal Gas law and the KMT

Graham's Law of Effusion is: