As mentioned earlier, ionic interactions can produce brittle, hard solids that have high melting points. This is due to the ions being held in a 3D array, known as a crystal lattice. 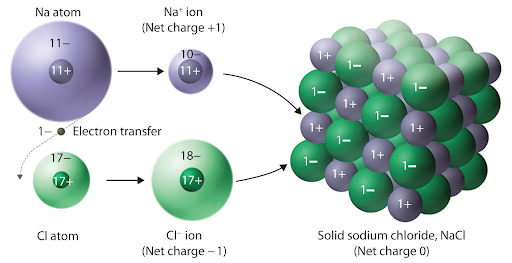 The reason for this is that ions are attracted to their opposites, and so negative ions surround positive ones and vice versa.

The lattice structure can be explained by the strong electrostatic forces:

💡Attractive forces between cations and anions are maximized in the lattice structure while repulsive forces are minimized.

In a lattice, electrons are stuck in place, or in other words, they are localized. This makes ionic solids very poor conductors of heat and electricity since there are no electrons moving around.

When ionic solids melt into liquids though, they do conduct heat and electricity. This is because the ions are free to move in the liquid phase. This applies to the aqueous phase as well.

Lattice Energy is the energy released when ions bond to form an ionic solid. Remember Coulomb's Law? It actually relates to lattice energy too; it's kind of everywhere.

To recall, Coulomb's Law states that the smaller the distance and the higher the charge, the stronger the attraction between two ions💪.

Let's ease into lattice energy...do you also remember how to find out which ionic compound would have a higher melting point? Let's review that, it'll help with lattice energy I promise!

If you still don't remember that process, you can review here!

Lattice energy depends on the same two concepts that you used in that question: charge and distance. Coulomb's Law directly relates to melting point and lattice energy so just remember:

Which of the following compounds have a higher lattice energy?

The following question is from the Advanced Placement YT Channel. All credit to them.

(a) Looking at the periodic table and remembering electron configuration, you should get:

You cannot leave the electron configurations of Mg and Sr as your final answer! Make sure you always answer what they are asking.

(b) This question goes back to periodic trends. Which ion has more electrons and electron shells? Sr2+ does, so it has the larger ionic radius.

(c) Charges are the same, so size must be accountable for the difference in lattice energy.