From roughly 1500-1750, Western European nations utilized mercantilism as their dominant economic philosophy. In the mercantilist system, governments controlled the trade that occurred within their borders.

Tariffs (taxes on imports/exports) were frequently imposed by governments under this system, and the goal was often to export more than import. By 1750 and through 1900, Western European nations put aside mercantilism in favor of free trade and laissez-faire (government is “hands off”) policies.

Adam Smith wrote the book, The Wealth of Nations (1776), on laissez-faire capitalism and free markets. Throughout this time period, his practices gain wider and wider acceptance. The notions of mercantilism and governments controlling trade fade away. His belief that the free market is guided by the law of supply and demand is still popular in modern times.

Equipped with free trade government policies, businesses developed new approaches along with new practices in banking. Large businesses developed into corporations with ownership from shareholders, with some even taking control over whole industries, thus becoming a monopoly.

The Stock Market allowed for individuals to buy and sell stocks or shares, thus becoming part owners of companies. Stockholders were not personally liable, thus it decreased risk for individuals while also increasing opportunities to make a profit.

Some corporations operated in more than one country. These are called transnational businesses. One example of a transnational business is the HSBC bank, also known as the Hongkong and Shanghai Banking Corporation, which is a British financial institution that conducted a lot of its business in China, including making a lot of money off the opium trading of the mid-1800s. Banks did continue to increase in number, especially with the advent of the insurance industry. 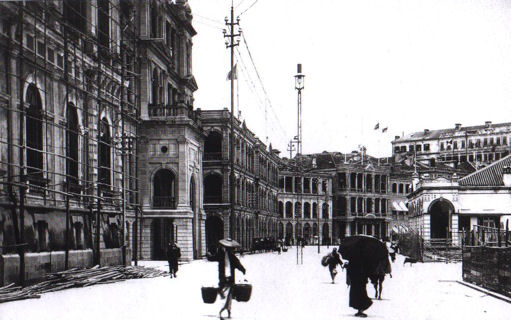 With people becoming wealthier, including a middle class developing, people spent money on products they did not need to survive. This describes consumerism, and the continual improvement and efficiency of manufacturing increased the availability of consumer goods.

Along with more money, people had leisure time. Biking and boating become popular activities for people to do, as well as athletics and enjoying professional sports became part of everyday life within industrialized areas. Other entertainment choices, such as music halls and parks, brought people together despite economic class designations.