Europeans in the World

As Europeans explored and colonized Africa and Asia, they set up trading post cities to establish a base. These cities became centers of imperial administrations later on.
In West Africa, European merchants and missionaries reached inland to Kongo and Benin. The Asante Empire and Kingdom of the Kongo participated in slave trade, which increased their wealth and power.
Japan initially welcomed Portuguese and Dutch traders and missionaries, then pulled back by banning Christianity and contact with the outside. They remained isolated for most of the 17th and 18th centuries in an effort to protect traditional culture.
China was also set on isolating itself from foreign affairs. After Zheng He’s explorations, the Ming dynasty retreated into isolationist policies. Europeans would have to wait a few centuries for access to China.
The Mughals in India were open to trade with Europeans and the British East India Company (EIC) was established. The EIC took advantage of tensions between Muslims and Hindus in order to expand influence. The British moved inland and by the 19th century, had direct colonial control over all of India.

The Spanish and Portuguese divided up the lands of the Americas before they even explored or conquered any of it. In 1494, they signed the Treaty of Tordesillas, which gave Brazil to the Portuguese and everywhere else to the Spanish. Languages are still divided on these lines.
The Spanish conquistadors brought down the thriving Aztec and Inca empires within a few decades. The Aztecs fell first when Hernan Cortes and his troops brought disease to the region. Cortes also combined the forces of Aztec rivals to topple them faster. He then established the Spanish capital of Mexico City.
The Incas fell quickly because of disease and betrayal. Francisco Pizarro and his troops captured the Inca leader Atahualpa and convinced the Inca to trade gold for his return. They complied, but Pizarro still had Atahualpa killed, effectively toppling the empire.
The Spanish also established a fort at St. Augustine in present-day Florida. In North America, the Spanish had control of the southwest regions, central America, and Florida.
North of the Spanish territory, the French and British were fueling their rivalry as they competed for land and control of resources. The French aligned with the Iroquois for protection and trading rights. The rivalry eventually popped off as the Seven Years’ War exploded tensions around the world. The British drove the French out of Canada and India after that.

Economic systems were disrupted as trade intensified. The Portuguese controlled some areas on the Indian Ocean network as they were strong armed locals, but merchants continued to trade and migrate.
In the Americas, the Spanish established the encomienda system to force Natives to harvest cash crops in exchange for food and shelter, similar to the feudal system. In this labor system, the Natives were tied to the land and were not free to leave. This same system was used on smaller farms, which was called the hacienda system.
Meanwhile, the silver trade was insanely profitable for the Spanish and the mines at Potosi and Zacatecas needed as much labor as possible. Indigenous peoples were forced to work in the harsh mines using a modified Mit’a system to nearly enslave the Natives.
🎥Watch: WHAP - Labor Systems in the Early Modern World

The work of harvesting cash crops and mining silver was labor intensive. These new markets were profitable, but could only be sustained with a lot of cheap or free labor.
Africa was targeted for labor in the Americas because Indigenous populations were decimated by disease and were able to escape with knowledge of the land and the ability to blend in with other Natives.
Indentured servants provided cheap labor for a while, but plantation owners couldn’t scale their businesses when laborers would leave after seven years.
As the slave trade expanded, some African Kings participated and shared profits. Slaves were captured, transported to holding pens (“Points of No Return”), and then crammed on ships for the Middle Passage journey across the Atlantic. 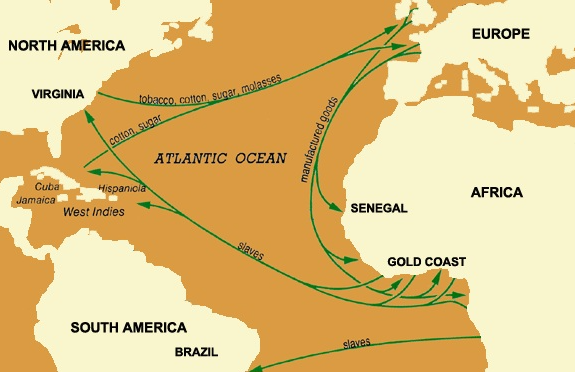 Map of the Middle Passage. Image Courtesy of crispusattucksmuseum.org

The demographic effects of the slave trade in Africa were unprecedented. Although the population of Africa ultimately increased because of increased food resources, in some regions the population declined as slaves were kidnapped. Families were separated and there was a gender imbalance because more men were taken than women.