We are almost to the end of the big ideas!! (Almost . . .) I know I've said it before, but this one is important.
Big Idea 4 covers the crucial act of taking all of your evidence and claims and turning them into one coherent argument 🗣️ In a lot of ways, this is the most important thing you do in AP Seminar. Yes, you gather evidence, and think about arguments and perspectives, but at the end of the day you have to actually do something with them.
Synthesize: combine (a number of things) into a coherent whole
Think about it like this: if you want to build a house 🏠, you need to gather all of the instructions on how to build 🛠️ it. Then, you need to get all of the tools and supplies to put it together. But, if you stop there, you won't have a house. You have all the supplies and knowledge, but no house. You have to build the darn thing. That is what BI 4 is all about—building the house.

As always, let's tackle the essential questions first.
💡 AP Seminar Course and Exam Description
The EQs in BI 4 are asking you to combine ideas that we talked about in earlier unit guides. Things like line of reasoning and thinking about multiple perspectives are all things that we've talked about earlier.
There are really only two new ideas here:
We are going to mostly focus on these two ideas, but I will bring in these old ideas as we go.

You'll hear the word 'evidence' A LOT in Seminar. Do you have enough evidence? Is it good evidence? Do you have a wide variety of evidence? Things can get overwhelming very quick. So let's break it down.

First of all, what the heck is evidence 🧐? Evidence is anything that supports your claims. If your claim is that it's too hot outside, your evidence would be the temperature. Easy enough, right? Looking for good evidence, and a wide variety of it, can get tricky.

The idea of "good" evidence can be very subjective. Any evidence that is well-corroborated and not opinionated can be considered good evidence. However, you need to be looking for evidence that is good for YOUR claims.
If you have focused 🔬 your argument and claims around a historical argument and you bring in a piece of evidence written by a nutritionist, does that evidence really fit your claims and argument? Certainly it brings in a different perspective, but does it actually add anything? These are the questions you should ask yourself.

Where to Look for Evidence 👀

Physically finding evidence can be tricky. My recommendation is to stay away from Google searches. Typically just Googling won't get consistently good evidence. Instead, find out what databases your school has access to. Scholarly databases give a lot of options for finding strong evidence.
You will also have access to EBSCO, a database that all Seminar students are granted access to.
Finally, I highly recommend checking out your local library. Work with a librarian and they will, at the very least, point you in the right direction. Often times they will really help you find what you need.
Don't be in the spot where you don't have good evidence because you can't find it. It's out there, you just have to get it!

How to Analyze Evidence 🤔

One moment of high school English that is etched into my mind is when I learned how to properly use a quote in a paper. Before this moment in English 2 I thought that I could just throw a quote in by itself and I did my job. This is not the case. You need to work a quote naturally into a sentence to support some previous statement or idea. This makes the quote a valuable part of whatever essay or paper you're writing.
The reason I bring this is up is because you need to take the same approach with evidence. Just throwing evidence into a paragraph does nothing to support the claims that you have made. Just like a quote with no context does not add anything to an essay, evidence without proper analysis adds nothing to your argument.
In order to analyze evidence you need to think about three questions:
Whenever you use evidence you should be answering all three of these questions. Part of being a good researcher is being critical of your evidence. Why am I using this evidence? Is this the best evidence I can find for this claim?

How to Connect Evidence 🤝 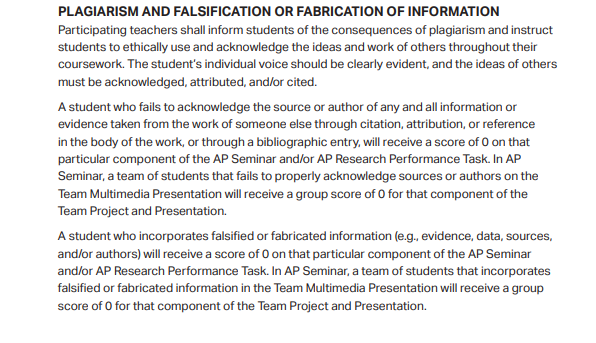 Above is the College Board's official policy on plagiarism. You definitely need to read it, but I am also going to sum it up very simply here.
Anything that you pass off as your own, when it isn't, is plagiarism. This applies to all forms of medium, not just written works. Pictures, videos, and art all need to be properly cited.
Often plagiarism is not done on purpose and is accidental. Whether you forgot to cite or you thought a previous citation was sufficient, any accidental plagiarism is still plagiarism.
🔥 Quick Tip: We will go into more detail about citations in the Performance Task unit guides, so look for that information there!

How to Avoid Plagiarism

The best way to avoid plagiarism is to cite everything unless you are 100% sure you don't have to.
When in doubt, cite it out!
Double and triple check your citations to make sure they all match up and there aren't any gaps. College Board does help a little bit with this. When you submit your IRR and your IWA, an originality report will be run, and your paper will be compared to whatever can be found online. This isn't perfect, as it doesn't take into account your citations, but it does highlight areas that should be cited. This is a good way to make sure that you have cited everything you need to.

👨‍🎓 How Big Idea 4 Relates to the Exam

PT 1 focuses heavily on gathering evidence and how you use it. As we can see with the IRR, twelve points are devoted just to the evidence you gather.

The TMP is less focused on evidence, but it is still important that you select meaningful evidence that you actively use in your presentation.

The IWA in PT 2 is more of a traditional argumentative research paper so it is going to rely heavily on your evidence and how you use it.
As we can see in row 5, it is not just about getting good evidence, but it is also about making sure it supports your argument.

Even though it is in a more limited capacity, the End of Course exam also has you working with evidence. In EOC A, you will need to evaluate the author's use of evidence and how credible it is. This goes beyond just saying whether the evidence is good or bad, you need actually explain why.

In EOC B you will also be using evidence, although it will be provided by College Board. You will still have to use it effectively to support your argument, but you will not have to search for it. An important aspect of EOC B is synthesizing the ideas of the evidence they give you into one coherent argument.

Synthesizing good evidence is an important part of what you will be doing in your Performance Tasks and on the End of Course exam. You should really focus on gathering credible evidence that actively supports your claims. Without good evidence, your argument is not effective.