What is "Pathway Dependency"?

A pathway is the route that a process takes. Typically, pathway dependency/independency is applied to functions. Essentially, if the result of something depends on the order in which you did it, it is pathway dependent and if it is not, it is pathway independent.
For example, the change in elevation of a mountain climber is pathway independent🧗. You could walk in a straight line or a zig-zagged line up the mountain but regardless, you both end up at the top of the mountain⛰️.

A state function is a property whose value does not depend on the path taken to reach that specific value. In basic terms, state functions are pathway independent, just like our elevation example.
A pathway dependent function is called a path function, though we'll only be dealing with state functions. 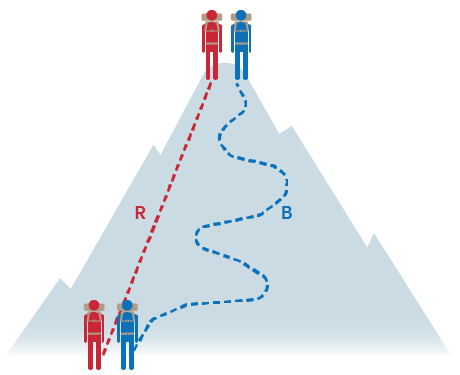 Our general strategy is going to be manipulating these three reactions and then adding them together to form the overall reaction. This is using Hess's Law to find the enthalpy.

When I approach a Hess's Law question, I always find the reactants and products in the given thermochemical equations. This is what I would note🤔:

After doing these things, we are left with:

Now the equations are set up properly to create the overall equation, but what happens with the extra compounds?
You could think of these as spectator compounds; they cancel out since they are present on both sides of the equation when all 3 equations are added together.
With this being said, the O2s cancel out, H2O cancels out, and the CO2s cancel out.
👉We then add the reactions together to find the original reaction and that ΔH = +1299.5 kJ + (−787 kJ) + (−285.8 kJ) = +226.7 kJ.

Calculate the value of ΔHreaction for the following reaction using the listed thermochemical equations.

After doing these things, we are left with:

Now we have everything on the right side of the equation and they all have the proper coefficients. Our last step is to check if all the spectators cancel out, so let's count them up!
Luckily, all 3 compounds that we have to balance are in equation 1, meaning we now have to manipulate it in order for the equations to add up to the overall equation.
🤔What should be multiply equation 1 by? In order to get the same amount of each compound, we have to multiply equation 1 by 4 and its enthalpy by 4!