World War II, like World War I, was a total war. Colonies of the Allied Powers, such as India (Britain), also joined the war, making it a truly global conflict on a much greater scope than WWI as it now included more countries in Asia, Africa, Europe, and even the Americas.

Under Winston Churchill’s leadership, Great Britain remained unfazed by Germany’s blitzkrieg (swift war) tactics. His military ingenuity allowed him to hold off Hitler’s forces after the fall of France in 1940 despite being close to the defeated nation. Churchill’s determination to not let Britain fall motivated him to forge an alliance with Franklin Roosevelt and the US, officiated after the latter joined the war in response to Japan’s bombing of Pearl Harbor in December 1941. Under the Lend-Lease Act, both countries were able to share (US lending Britain) war materials, weapons, and equipment necessary for repelling the Axis Powers.

Franklin Roosevelt took advantage of the war to mobilize the United States’s undamaged factories and ramp up their production of everything from ammunition to aircraft. By doing so, he gave the American economy the boost it needed, enough to get the US out of the Great Depression. Like WWI, women were given ample opportunities in the job market and production rates were at all-time highs once again. The US also led the liberation efforts in the Pacific, which was the other major war theatre, against Japan through an “island hopping” strategy.

In terms of logistics, morale, and productivity, totalitarian regimes fell behind in mobilization efforts. Attitudes and policies made their war machines less effective as time went on.

Joseph Stalin’s Soviet Union was already weakened by the Five Year Plans. The purges within farmer groups and communist party officials also eliminated some of the most brilliant military strategists in Russia. To add insult to injury, a miscommunication between Stalin, Churchill, and Roosevelt delayed reinforcements to the eastern front of the European theatre, leading to millions of Soviets dying before his two allies’ reinforcements could finally arrive.

Propaganda and art were used heavily by both western democracies and totalitarian states (more by the latter). Hitler’s Nazi Germany made use of nationalist propaganda to motivate German youth to participate in the war as an honorable and glorious notion. Anti-Semitic art was also spread throughout the country, a chilling precursor to one of the most tragic (on top of violent) series of events of history: the Holocaust.

World War II featured upgrades of previously featured weapons. To name a few, tanks are now better adapted to more environments, more varieties of firearms are used based on the range of combat, and atomic weapons such as those infamously dropped on Hiroshima and Nagasaki have destructive capabilities hundreds of times deadlier than the classic mustard gas from WWI.

WWII is also the first conflict where civilians are purposely targeted as part of long-term military strategies in war. To encourage surrender, cities in Japan (Tokyo, Kobe) and Germany (Hamburg, Dresden) were continuously bombed, killing people by the thousands. With the development of technology comes higher casualty rates, clear indicators of the inevitability of death and destruction in extreme times like war. 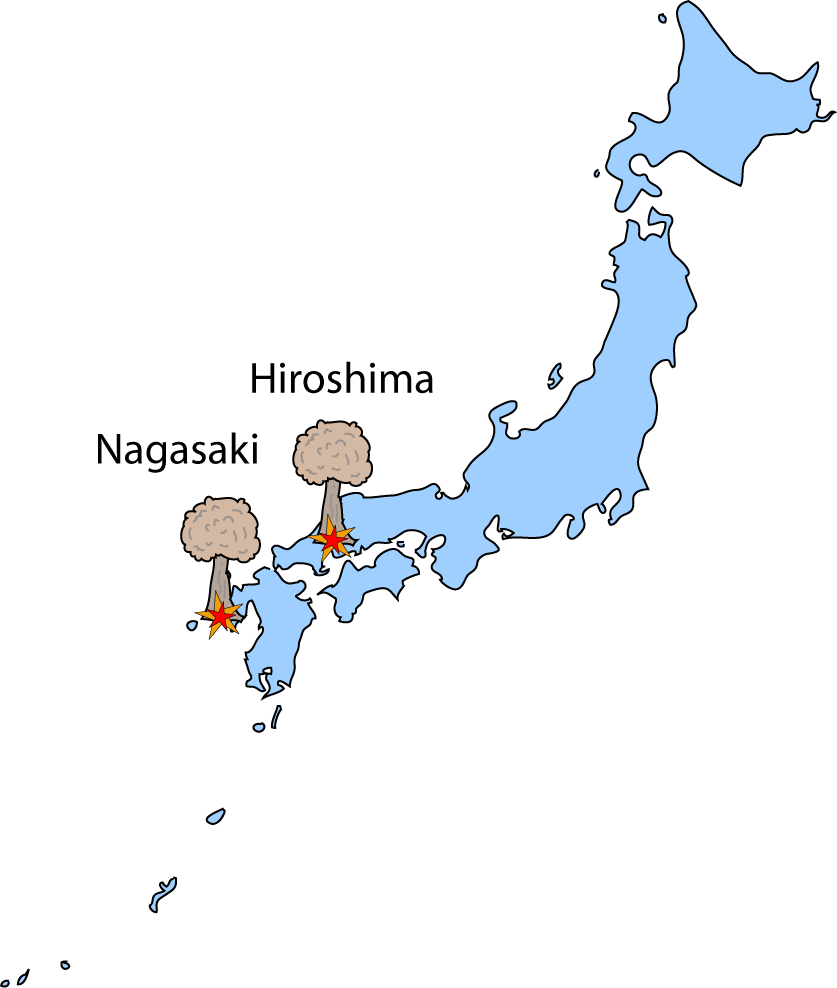 Locations where the atomic bombs were dropped. Photo courtesy of Wikimedia.