Storage is the process of maintaining or keeping information readily available. The three types of storage are short term memory, long term memory, and sensory memory.

The Atkinson-Shiffrin three-stage model is a model that shows information going from shallow to deep memory with the three processes (encoding, storage, and retrieval). Here it is:

Even though we went over these terms a bit, let's review them once more and connect them to this model.

Events come from the environment into your sensory memory. They stay here long enough so that they could move into your short-term memory. For example when you walk past someone on the street, you see what they wear, but you don't really pay attention. However, when you notice that they are wearing the shirt with your favorite band on it, it crosses into your short-term memory from your sensory memory. If you pay less attention to a task when visually noticing it, you'll quickly forget it.

A short sensory memory of visual stimuli 👀 This lasts less than a second!

Our short-term memory holds a few pieces of information briefly. It disappears really quickly and is either stored farther into the memory system or forgotten completely. This all depends on how much attention you pay to the information and how much you rehearse the information.
If you were asked to remember a chain of numbers, such as 3 6 2 8 1 8 4 7 9 4, and given only 1 second to do so, you'd probably only remember the first 7. The magic number is really 7, but the range is 7 +/- 2.

Chunking is the process of grouping information to be stored or processed as single concepts. The most common form of chunking occurs with cell phone numbers📱📞 For example, a phone number with the sequence 3-6-2-8-1-8-4-7-9-4 can be chunked as 362-818-4794.

Permanent memories! Our long-term memory is completely limitless ♾️; we can store as much information here as possible and it can easily be recalled. This includes facts, skills, and things like flashbulb memories.
Long-term memory can be broken up into several categories, the first being explicit memory and implicit memory. 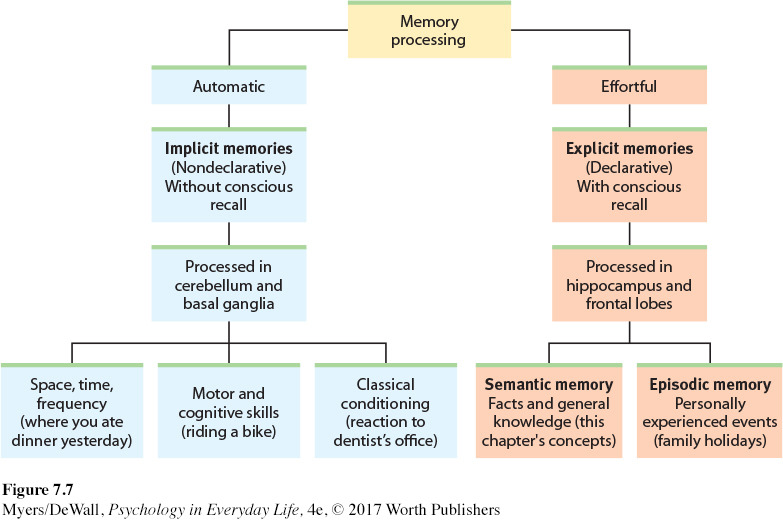 There are several ways we organize the information we store:

The diagram shown above is actually a hierarchy. It starts with really broad information and then splits up into specific classes. Hierarchies help us retrieve information quickly and efficiently.

A schema is a concept or framework that helps individuals make sense of information.
Because of schemas, you are more likely to believe the information that supports your belief and would ignore information that disagrees with your viewpoint.

A concept is a mental grouping of events, people, and similar things. For example, if someone tells you to think of a phone, your concept is the type of characteristics you think the phone contains📱 Does it have buttons or is it a touch screen? Is it white, pink, black, etc.? Is it large or small? The characteristics you assign to a “phone” make up your concept of a phone.

A prototype is a mental image or the best representative of a certain category.
Think about the concept of a bird. "A robin is a bird 🐦" is said more than "a penguin is a bird🐧 " because the robin more closely resembles our bird prototype.
Whenever you use adjectives like "smaller" or "quicker," you are automatically comparing to a prototype. For example, say you were looking at your favorite type of dog, a German Shepard. When you look at a Yorkie, you may say "Wow, that dog is so small" (compared to your prototype). 🐕