You know how psychologists describe variables using an operational definition? Intelligence is very subjective, too, but psychometricians are involved in trying to create some sort of test that measures intelligence.

A good test must be:

Reliability and validity are two completely different things and they cannot predict each other.
🎯Target analogy:

There are two primary types of tests:

Binet was hired to study an education problem in France 🇫🇷 In order to complete his task, he wanted to compare a child's potential to what the child was actually doing. With this, he came up with mental age.
Mental age is the age at which a person functions intellectually. For example, a 9-year-old could have a mental age of a 14-year-old because of their advanced knowledge in certain subjects. If a child has a mental age below their actual age, it means they struggle a little academically.
The idea of an IQ (intelligence quotient) arrived during this time.

Grit is basically passion and determination used to pursue a long-term goal.

We keep talking about a normal curve and deviation, but do you remember what those terms are?
Intelligence scores usually form a normal curve, which is a bell-shaped curve with two extremes and a large middle. Let's discuss it: 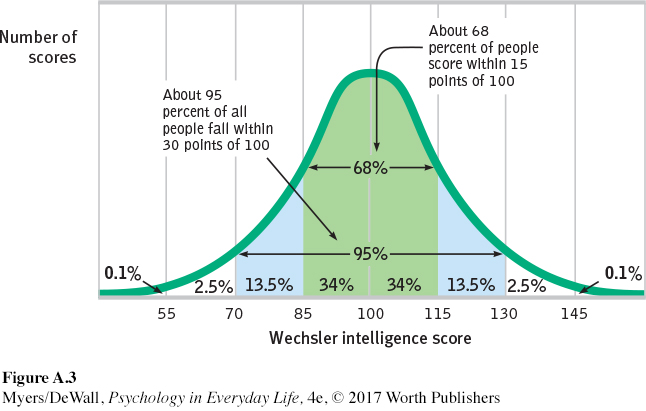 This normal bell curve, as we discussed in unit 1, is all about intelligence scores on the Wechsler Intelligence Scale.

Those that are usually on the higher end of the normal curve are gifted 🎁 Their talents and intellect are beyond what is considered one’s normal Mental Age.

Individuals with savant syndrome perform poorly on intelligence tests and have serious intellectual disabilities. However, they have a certain talent or skill that is above average.
An example of this is someone that can barely produce and understand language, but is a genius when it comes to mathematical calculations 🧮

Every test has some sort of bias, and Earl Hunt and Jerry Carlson had a debate over differences in IQ. The stereotype threat is one of the ways ones test score could be affected because of bias.

The stereotype threat is where someone may do worse on a test because they are told they aren't good enough (because of the stereotypes that exist in society). If a Black woman is told she is incapable of passing a medical exam, she may doubt herself and the stress could impair her performance. The stereotype threat causes a change in our behaviors which, in turn, affects our IQ.