5.8 Biases and Errors in Thinking

Because of our mental concepts and other processes, we may be biased or think of situations without an open mind. Let's discuss what those other processes are.

Fixation is only thinking from one point of view. It is in the inability to approach a situation from different perspectives 👀Fixation is used interchangeably with your mental concept.

Functional fixedness is the tendency to only think of the familiar functions of an object.
An example of functional fixedness would be the candle problem. Individuals were given a box with thumbtacks, matches 🔥, and a candle 🕯️Then they were asked to put the candle on the wall in a way that the candle wax would not drip while it was lit.
Most of the subjects were unable to solve the problem. Some tried to solve it by trying to pin the candle on the wall with a thumbtack. The successful method was to attach the box to the wall using the thumbtacks. Then, put the candle in the box to light it.
Because of functional fixedness, individuals were unsuccessful because they couldn't understand how a box 📦 can be more than just a container for something.

The following two heuristics can lead us to make poor decisions and snap judgements, which downgrade our thinking.

An availability heuristic is the ability to easily recall immediate examples from the mind about something. When someone asks you "What is the first thing that comes to mind when you think of . . .," you are using the availability heuristic.
Rather than thinking further about a topic, you just mention/assume other events based on the first thing that comes to your mind (or the first readily available concept in your mind).
This makes us fear the wrong things. Many parents may not let their children walk to school 🏫 because the only thing they could think of is that one kid going missing ⚠️This is the very first thing that comes to their mind and because of it, they fear their children suffering the same fate.
Therefore, we really fear what is readily in our memory. 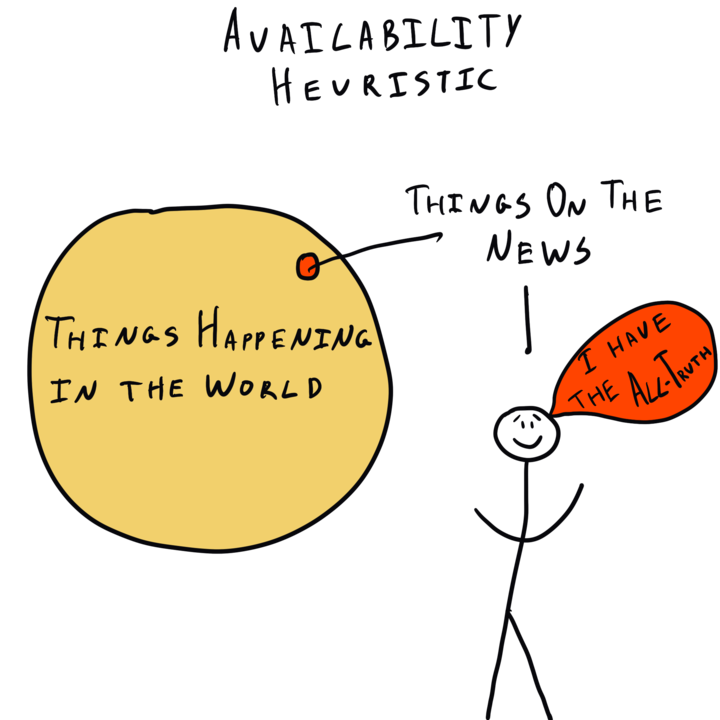 Image Courtesy of The Decision Lab.

The representativeness heuristic is when you judge something based on how they match your prototype. This leads us to ignore information and is honestly the stem of stereotypes.
For example, if someone was asked to decide who most likely went to an ivy league school (when looking at a truck driver 🚚 and a professor 👩‍🏫👨‍🏫), most people would say the professor. This doesn't mean that the professor actually went to an ivy league school, this is just us being stereotypical because of our prototype for a person that goes to an ivy.

There are so many different types of biases and we experience each and every one of them in our everyday lives.

Confirmation bias is the tendency of individuals to support or search for information that aligns with their opinions and ignore information that doesn't. This eventually leads us to be more polarized ⬅️➡️ as individuals, and is another way of experiencing fixation.
A key example is how many republicans 🔴 watch Fox News to view a channel that confirms their political beliefs. People really dislike it when others have differing opinions and continue to find information that back up their own beliefs.

The halo effect is when positive impressions of people lead to positive views about their character and personality traits. For example, if you see someone as attractive you may think of them as having better personality traits and character even though this isn't necessarily true.

Self-serving bias is when a person attributes positive outcomes to their own doing and negative outcomes to external factors.
For example, if you do well on a test 💯 you may think it makes sense, because you did a good job of studying to prepare for the exam. But if you fail the test, you may put the blame on the teacher for not teaching all the material or for making the test too hard.

Attentional bias is when people’s perceptions are influenced by recurring thoughts.
For example, if marine biology has been on your mind a lot lately, your conversations may include references to marine biology. You would also be more likely to notice information that relates to your thoughts (marine biology).

Actor-observer bias is when a person might attribute their own actions to external factors and the actions of others to internal factors.
For example, if you see someone else litter, you might think about how people are careless. But if you litter, you might say it was because there was no trash can🗑️ within sight.

Hindsight bias is when you think you knew something all along after the outcome has occurred. People overestimate their ability to have predicted a certain outcome even if it couldn't possibly have been predicted. People often say "I knew that."

Framing impacts decisions and judgments. It's the way we present an issue, and it can be a very powerful persuasion tool.
For example, a doctor could say one of two things about a surgery:
Obviously, 10% of people die is a much more direct way to phrase the same thing. This makes it scarier than "90% of people survive." Framing is a very important tool! 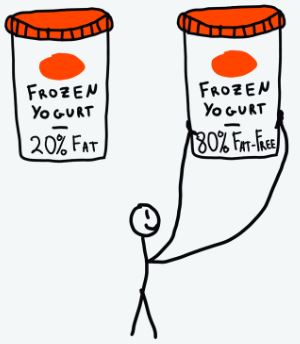 Image Courtesy of The Decision Lab.