We process information unconsciously as our neuron systems work together, each performing part of the task. It's important to understand that perception is majorly influenced by expectations, context, emotions, and motivations.

Your perceptual set is your mental predisposition to perceive one thing but not another. Our perceptual set can change: what we see, feel, taste, and touch. If someone told you that this new restaurant opened nearby and had really delicious food, you would expect to really enjoy the food, so you go and try it. The smell of juicy steak as you enter the restaurant, along with your expectation of the food tasting well, might influence your taste and possibly make you think the food tastes better than it really does.

Our perceptual set is determined by our schemas 💾 , which are concepts that organize information in our experiences. Popular examples of schemas are stereotypes and social roles.

The context effect has to do with top-down processing and the brain going back in time, allowing a later stimulus to determine how we perceive an earlier one.

Our attention to our surroundings can change our perception. Selective attention is our focus on a particular stimulus among others. One of the most famous examples of selective attention is the cocktail party effect, where at a party, you can hear one voice among a million others. You are only focused on that one person, so all of your attention is centered on them, blocking out all of the “noise.”

Our lack of attention could also lead to blindness: a failure to notice stimuli.

As mentioned earlier, a gestalt is a whole or a form, and they often exceed the sum of their parts. This can be explained by the phi phenomenon, which is the illusion of movement that is created by the succession of lights blinking on and off. If you press the link and watch the video for a few seconds, you would notice that even though the circles aren’t there at the same time, it looks like a circle is formed.

Another aspect of perception that Gestalt psychologists studied is the figure-ground relationship. This explains why we can distinguish a subject from its background. In the image below, you may see two faces facing each other, in black, or one vase, in white. Our ability to view either one of these subjects demonstrates the figure-ground relationship. 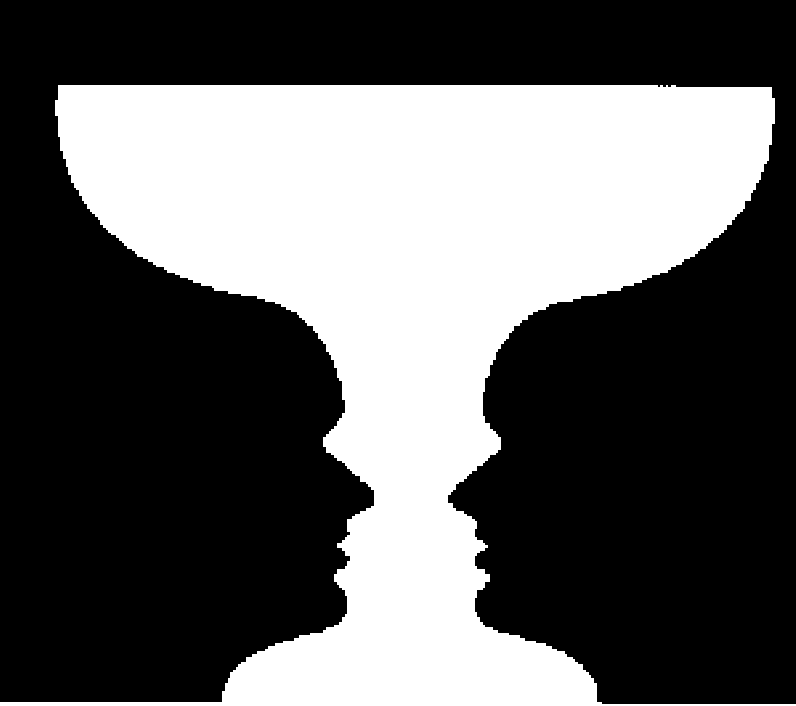 We also tend to group different stimuli together. We may group nearby objects together (proximity), perceive continuous patterns rather than discontinuous ones (continuity), and fill in gaps to form a whole object (closure). One main example of grouping is below:

Consider the following: DEMON DAY BREAK FAST. You probably read this as Demon, Day, Break, and Fast, but these words can also be grouped into Monday, Daybreak, or breakfast.

Many of these gestalt principles enable us to fall for optical illusions.

We live in a three-dimensional world. Isn’t it wild that our brain can perceive this and judge the distance of objects? This is called depth perception, and cues (monocular and binocular) can guide us when judging distance.

👀 Binocular Cues: cues that depend on the use of both eyes. Since your eyes are 2.5 inches apart, they have different views of the world. Combined, a new perspective is created.

The main binocular cue to know is retinal disparity, the difference between the two images. Comparing the images from both eyes, your brain is able to judge distance.

Imagine viewing a car as it approaches you. You know that the car isn’t getting bigger, but it appears like it is, since it's getting closer to you. This is an example of perceptual constancy, where you perceive moving objects as unchanging.

Something really interesting and fun has to do with our perceptual organization, in which our vision always wins when it competes with our other senses (visual capture). The McGurk Effect is one of the most common examples of visual capture; watch the video linked below! Even though the sound doesn't change and consistently says “Bill,” you can hear other things because of what you are seeing. Your eyesight dominates over your hearing, making you hear what you see.