Let’s look at the differential equation given in Eq. 12:

If we treat the derivative as a fraction, we can do something that would disgust professional mathematicians*:

We can perform step 5 because the two sides of the equation are equivalent, thus we can perform the same operation (ie. integration) on both sides and not lose any information.

Note that we need two constants because we found two different antiderivatives. However, we can combine them into a single constant:

This statement means that, because the set of real numbers is an infinite set** and both of the constants are real numbers, the difference between them is also a real number, ie. another constant we can call C.

Now, let’s say that we have some prior information about the function called an initial condition, eg. y(0) = 1. We can use this information to solve for C:

This implies that C = 0, which means we have found the specific solution to the differential equation in Eq. 12 along with the condition that y(0) = 1.

We can also revisit the differential equation in Eq. 11:

We need to take special precautions regarding the absolute value signs when solving for y:

So, the general solution is y = C2e^x - 5. For an additional exercise, find a specific solution to the differential equation such that y(ln5) = -6.

Another differential equation that is solvable via separation of variables is the equation below:

Solve the differential equation below given an initial condition and a range restriction. (Hint: rewrite the arcsine expression using the identity that defines a cosine graph as a shifted sine graph and do something similar for the arccosine expression.) 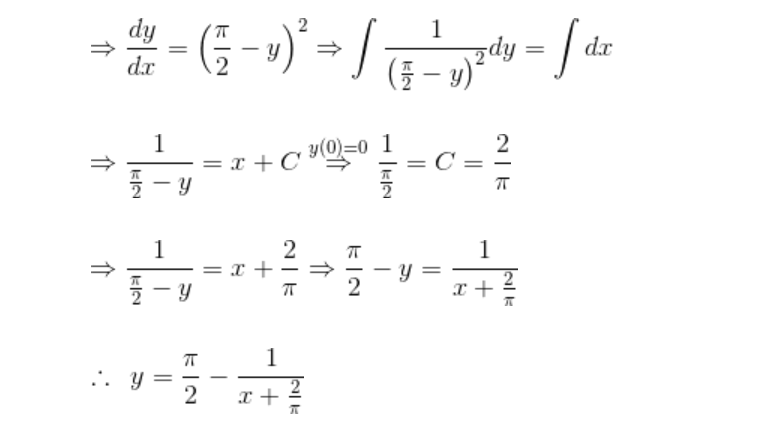 *This mathematical move is actually incorrect because multiplying the dx term over in that fashion implies that dx is a number and therefore dy/dx is a fraction, which is not true. However, this move is completely acceptable for the AP exam.

**“Infinite” in this context is not well-defined. The actual size of the set is called its cardinality, which is not simply infinity as implied in the statement:

Some definitions also include zero in the set of natural numbers (the lastly defined set in the statement).