The endocrine system is our body’s chemical communication system. It operates through glands that secrete hormones through our bloodstream. The pituitary gland, also known as the master gland👑, is located in our brain and is controlled by the hypothalamus.

Many hormones operate identically to neurotransmitters; therefore, our endocrine and nervous system work closely with one another. However, since the messages of the endocrine system travel through our bloodstream, they are slower than the fast electrochemical messages of the nervous system. They also last longer than the nervous system, as hormones take a while to dissipate from our bloodstream. Hormones also play a huge role in human development.
The following are part of the endocrine system:
💡It is important not to just memorize the functions of each, but to understand what is going on. The FRQs on the AP Psychology Exam are all about defining the term and applying it to a situation, so try and make connections between each of these and how they work together as a whole/system. 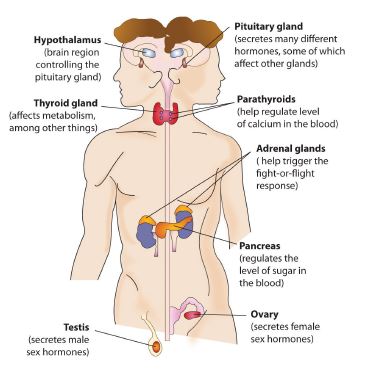 The following question is from the Advanced Placement YT Channel. All credit is given to College Board.
Freddy Schmidlap knows he needs to sit down and watch some AP Review videos on Youtube that he missed. But, he is having trouble making himself do so. When he tries, he feels nervous, a bit angry, and, being a teenager, hungry. Explain how the following terms relate to Freddy's situation.

Epigenetics is the study of how environmental factors influence gene expression. Freddy has an identical twin, named Teddy. Freddy is really nervous about reviewing but Teddy, who is also trying to review, has an elevated stress responses. This is because as a child, he suffered traumatic events, which influenced his gene expression and made him have a different level of stress response.
The hypothalamus is a structure that controls the pituitary gland and helps regulate hunger, thirst, flight or fight, and sex. His hypothalamus is releasing a hormone that is increasing his hunger. *This will be 100% more specific once you get deeper in the course. For now, this is what the response could look like.*
The pancreas regulates insulin levels and sugar in the blood. After Freddy eats, his body will secrete insulin and maintain his regular level of blood sugar.