The acceleration of the center of mass of a system is related to the net force exerted on the system, where a = F/m.

Key Vocabulary: Center of mass - a point on an object or system that is the mean position of the matter.

The linear motion of a system can be described by the displacement, velocity, and acceleration of its center of mass.

As we covered in 1.1 Position, Velocity and Acceleration there are ways to represent all three quantities graphically. We also reviewed how to interpret these graphs,  but it is imperative to understand the relationships each graph has to one another. 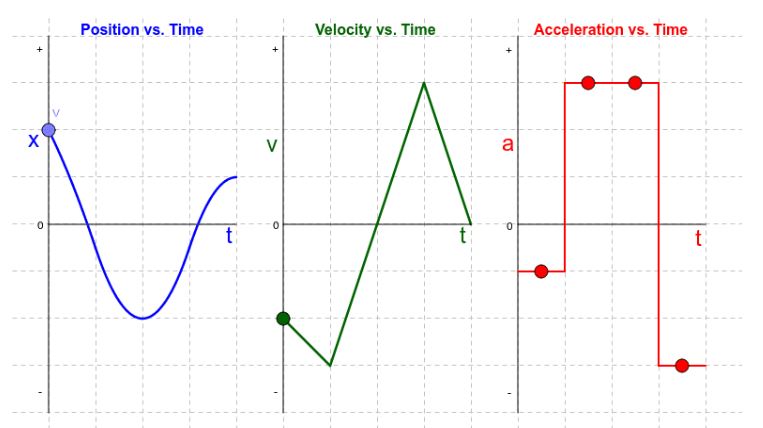 From the image above, we can use position to find velocity for any given period of time by looking at the slope of the Position vs. Time Graph. Working from velocity to position we can look at the area underneath the curve to find displacement, but it is not possible to determine how far from the detector the object is located from a Velocity vs. Time Graph.

Many graphs in physics will not be perfectly straight lines, but we can turn the curve into a straight sloped line! We accomplish this by squaring the x-axis value. 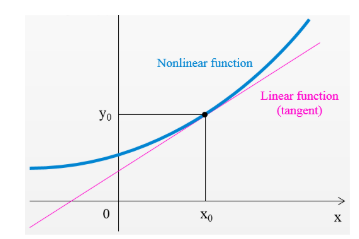 We start by graphing data points to confirm a nonlinear function (a curve), then we square the x-axis value and regraph! Keep in mind that once a graph is linearized finding the acceleration value is now m = ½ a, students often make the mistake of writing m = a which is double the acceleration.

In Kinematics there are four major equations you must understand to begin calculations. They relate acceleration, displacement, initial and final velocity, and time together.

Key Vocabulary: Free Fall - an object only under the influence of gravity

⟶ In free fall equations, we now replace Δx with Δy and a with g giving us a modified list of The Big Four as seen in the table above.

When dealing with horizontal projectile launches, launches that have an entirely horizontal initial velocity (ex. a ball rolling off a table), we break it up into two sets of equations: vertical and horizontal.

As shown in the chart above, there are three equations we use for the vertical component of launches and one for the horizontal. You cannot put an x-component into a formula without a y-component!

Key Vocabulary: Angled Launches - launches at an angle that include both a horizontal and vertical component of initial velocity

Key Vocabulary: Vector Components - the horizontal and vertical parts of a vector

Angled launches require you to find the Vox and Voy, or vector components, based on the initial velocity Vo and the angle Ө. Now you can solve for the following: Vo, Vox, Voy, Ө, t, X, Ymax, and Vf.

⟶ Still feeling a little confused on Angled Launches? Don’t worry! Check out this video from Khan Academy for more practice!  Want more practice - Check out the Fiveable Live streams on this topic: