Bookmarked 1.3k • 4 resources
See Units
What's poppin—thanks for checking out the Writing and Language guide! Let's get you prepped so you score the highest possible PSAT score you can when October arrives.

What are the PSAT sections?

On the PSAT, you'll work through four sections of the test. These four sections are:
After working through the hour-long reading test, you'll start thinking 🤔 like a writer while taking on the 35 minute writing and language section! In this guide, you'll learn about the different elements of this section, analyze strategies to pursue, and get some practice at the end.

Breaking Down Writing and Language

Writing and Language is the only section on the PSAT that gives you less than a minute per question, but there's no need to worry, because there's not a lot of reading you'll need to do. In 35 minutes, you'll take on 44 questions split among four passages (eleven questions per passage) ⏲️
Passages will cover a variety of topics, so you might even find a pasage that interests you. The possible categories and topics of writing include: 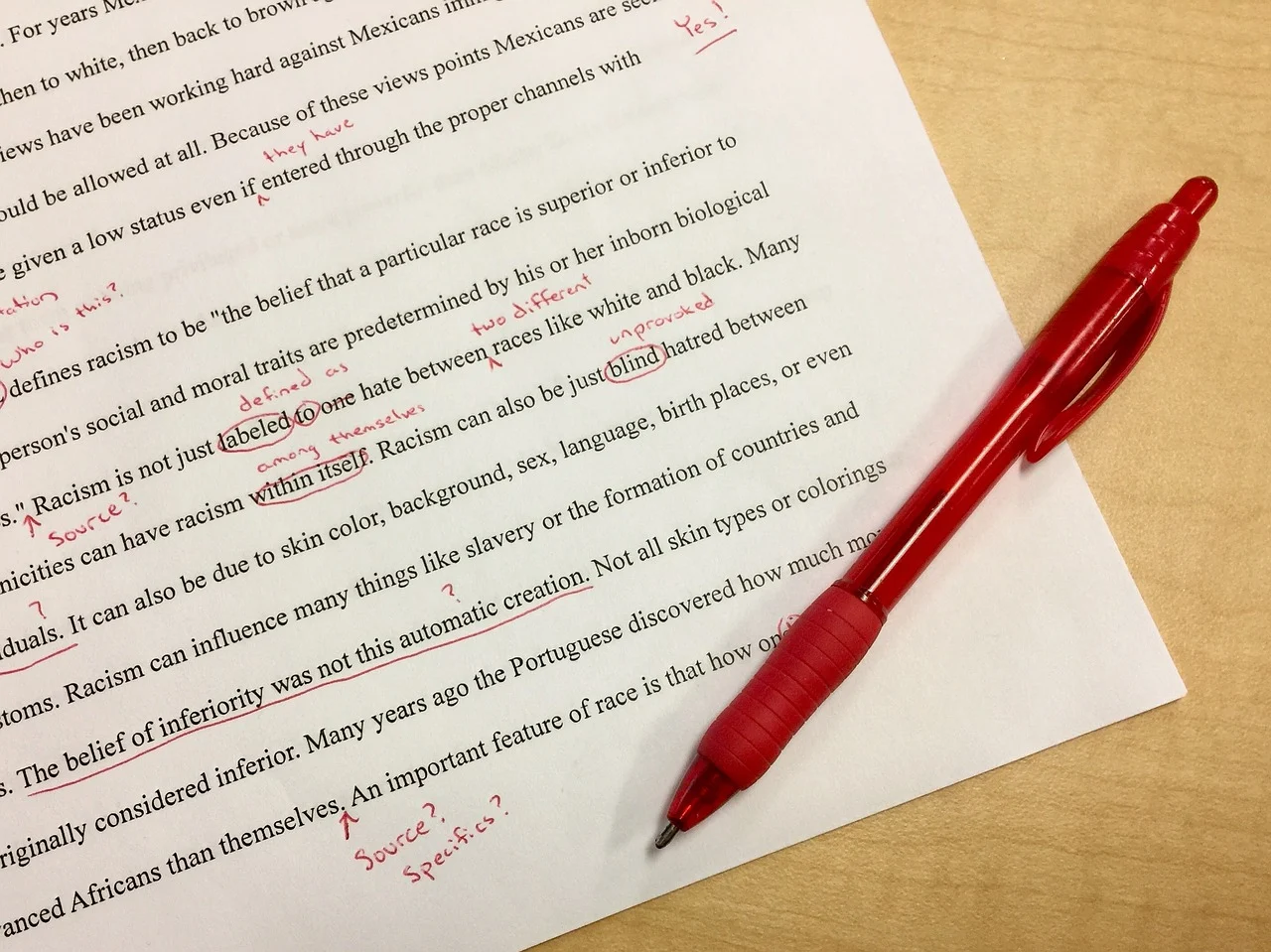 While you won't be using a red pen on the PSAT, answering questions on the Writing and Language test is just like editing a classmate's paper. Image from Pixabay.

On this section, you'll have a passage on the left side of the page with questions on the right side. Unlike the reading section, you don't need to flip back and forth between passages and questions to revise and edit! 😌
You'll see five categories of questions on the PSAT Writing and Language section. Let's break down each of these sections.

This is the core of the revision aspect of the Writing and Language section. When tested on command of evidence, you'll pick an answer choice that best improves a passage's communication of information and ideas. ⭐
For instance, you may answer questions that ask about the best way to enhance an argumentative claim or whether an added supporting detail is relevant.
Common questions in the command of evidence category include:
Here's what that may look like on the PSAT: 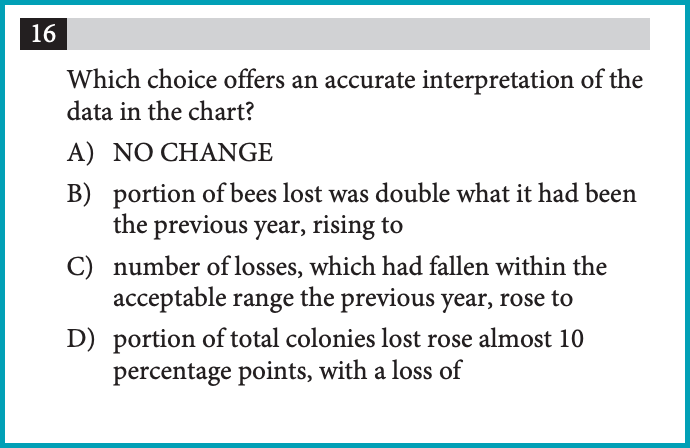 This question exemplifies the command of evidence category. Courtesy of Khan Academy.

Questions that cover words in context want you to improve the word choice (or diction) of a specific piece of text. Here is where the rule "shorter is better" often applies—you want to pick the most concise answer that isn't repetitive.
You could also be asked to use word choice that is more precise or improves style/tone. Here are ways you will apply words in context on the PSAT Writing and Language section:

Analysis in History/Social Studies and in Science

You'll encounter at least one history/social studies and/or science passage. In this category of questions, you'll make edits to a passage in these areas.
These questions may also include tables/graphs/charts, but you will not need to do any math when applying those graphics to the passage. Here's an example of a question in this category: 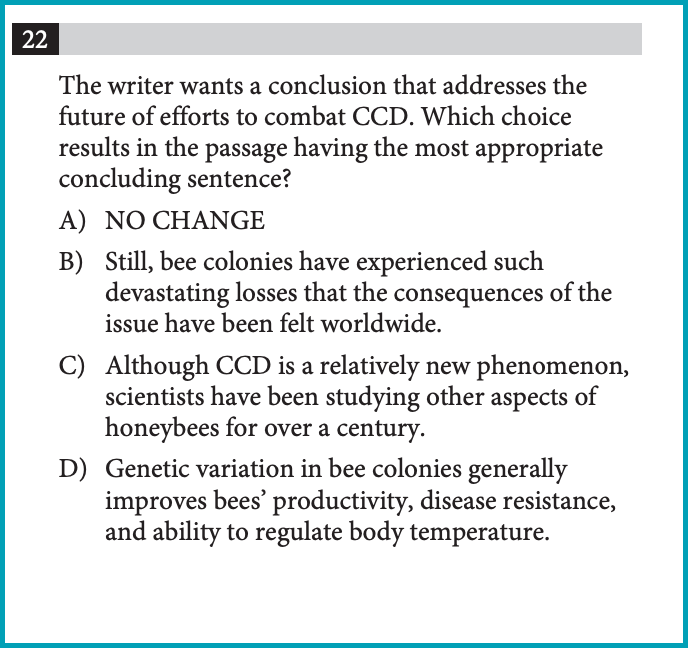 Here's what a question about analysis in science looks like. Courtesy of Khan Academy. 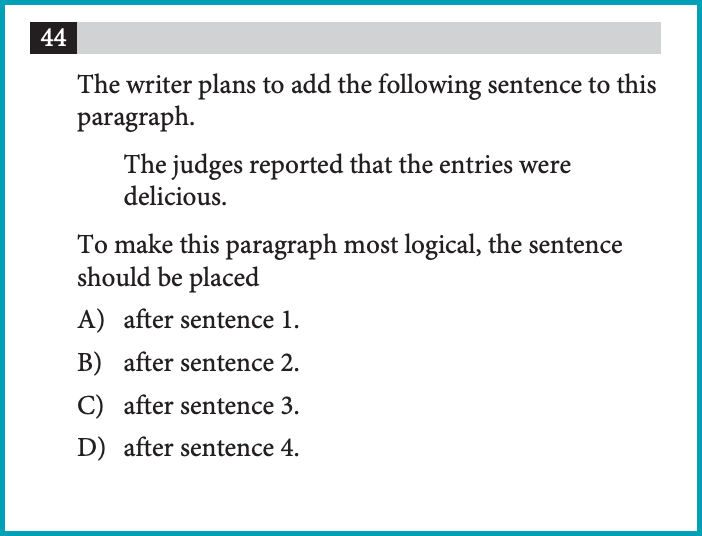 Placement of sentences for organization is a core aspect of the expression of ideas category. Courtesy of Khan Academy.

The standard English conventions section is fairly self-explanatory, and it covers the foundations of English: punctuation, usage, and sentence structure. You'll answer questions that ask you to change words, clauses, sentences, and punctuation, which include a variety of grammar topics:
Here's an example of a standard English conventions question:

Knowing how to effectively use commas and dashes is crucial to standard English conventions and scoring high on writing and language. Courtesy of Khan Academy.

With around 47 seconds per question, here are some pointers so you succeed! 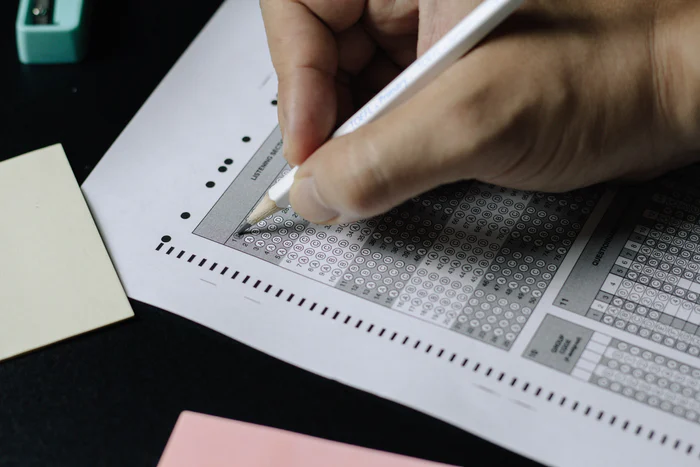 Remember to bubble as you go as well; a nightmare scenario is finishing the test but not being able to bubble in time! Image from Unsplash.

Want some quick practice? Here's an 11 question practice PSAT section that you should try to complete in about 9 minutes (in accordance with real timing). Note that this mostly tests your knowledge of standard English conventions! Test comes courtesy of CrackSAT.
More and more of our lives are mechanized, and at some point, we have to start wondering, what's the limit of that mechanization? Many factory workers in the 19th century thought their jobs were safe but we know (1) now that they were wrong. Many people in today's world believe there jobs (2) are safe, but how safe are those jobs really?
Studies abound that ask whether man or machine is better at particular tasks, and the results are not always so obvious. Sure, a machine is obviously better at say, welding (3) huge pieces of steel together, but what would you say if someone told you people are more likely to open up to a machine than to a psychologist? Or that a machine could write a quicker, more efficient news story than an experienced reporter could?
These questions may seem overly pessimistic (or overly optimistic depending on your point of view); however, (4) some recent studies have been truly remarkable. Take Ellie, a computer program used primarily to diagnose patients with depression, PTSD and other mood disorders. (5) Many patients found it easier to talk to "Ellie" than to a real person: she (6) didn't react in some of those seemingly judgmental ways that a person would, and her voice never broke on top of that (7) she could help psychologists to diagnose mental illnesses better than human observation could. She could detect facial movements or voice tones that a person might have not heard or ignored.
Whether Ellie is the way of the future is yet to be determined. We can't know right now, but there is no question that she raises some interesting questions, not only about the work of psychologists, (8) but also about all of what we think are definitively human activities.
On the other side of the discussion, however, there's some evidence that humans may have the upper hand. In some of the more basic tasks those learned before the age of about 10 humans (9) have a huge upper hand. Computers can do the complex thinking, but one thing with which they have a lot of trouble is, paradoxically, simplicity. Sure, a computer can tell your washer's and dryer's what (10) a perfect washing and drying cycle is, but can it fold your laundry? Your GPS can tell you the fastest route to the next state, but can it tell you the prettiest way to go or the best restaurants along the way? Not without humans!
While the battle of man against machine rages on. The (11) questions will persist. No matter who wins, though, humans will almost assuredly find ways to adapt: that's something we've been doing for thousands of years, which is something that no computer can say.
1) A. NO CHANGE
B. were safe, but we know
C. were safe; but we know
D. were safe. But we know
2) A. NO CHANGE
B. in todays world believe their jobs
C. in todays world believe they're jobs
D. in today's world believe their jobs
3) A. NO CHANGE
B. better at, say welding
C. better at, say, welding
D. better at say welding
4) A. NO CHANGE
B. your point of view), however,
C. you're point of view), however,
D. you're point of view); however,
5) A. NO CHANGE
B. depression, PTSD, and other
C. depression, PTSD, and, other
D. depression, PTSD, and other,
6) A. NO CHANGE
B. to a real person, she
C. to a real person; but she
D. to a real person she
7) A. NO CHANGE
B. never broke, on top of that,
C. never broke. On top of that,
D. never broke; on top, of that,
8) A. NO CHANGE
B. psychologists work
C. the work of psychologists
D. the work of psychologist's
9) A. NO CHANGE
B. tasks those learned before the age of about 10, humans
C. tasks, those learned before the age of about 10 humans
D. tasks, those learned before the age of about 10, humans
10) A. NO CHANGE
B. can tell your washer and dryer what
C. can tell you're washers and dryers
D. can tell you're washer and dryer
11) A. NO CHANGE
B. on; the
C. on—the
D. on, the

If you need help with PSAT Writing and Language, here are some resources and PSAT practice tests you can use to score high on test day:

Thousands of students are studying and learning together.
join now
Studying with Hours = the ultimate focus mode
Start a free study session

Thousands of students are studying and learning together.
join now
Studying with Hours = the ultimate focus mode
Start a free study session