Phase changes could be represented in a variety of ways! The following curves might help you understand the relation between phase changes and endothermic/exothermic processes more.

We can more importantly see how transitions between states of matter work energetically through a heating curve: 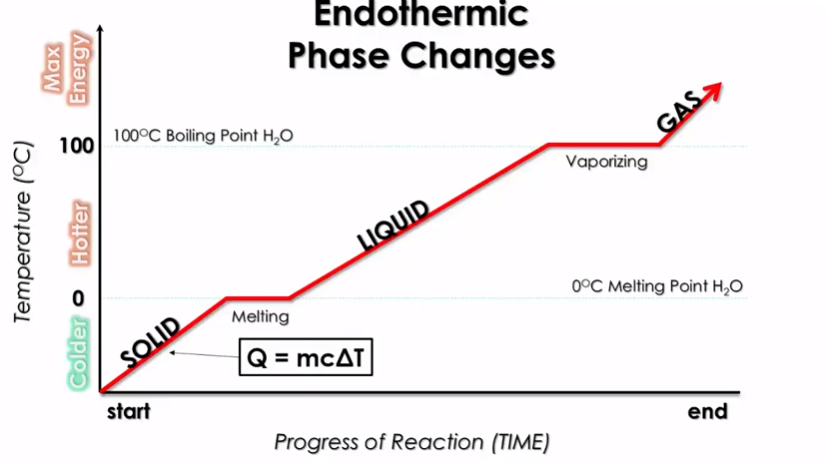 Here, the x-axis is the progress of the reaction, or span of time, and the y-axis is temperature🌡️. We see the transition from solid to liquid to gas as temperature increases. This shows how as you introduce energy into a system, the system goes from a solid to a liquid to a gas.

Wait... What Are Those Plateaus?

It makes sense that temperature increases as you go from solid to liquid to gas, but what are those plateaus marked melting and vaporizing? Well, for a short time while transitioning states, you need to use energy to actually melt or boil the object.
To restate this, you not only need to get up to the proper temperature, but you also must add energy to melt/boil all of it. These are called the heats of fusion (Hf) and heats of vaporization (Hv) going from left to right.
So think about it: a solid melts into a liquid, right? But there is a transition between the two states. The solid stays at 0°C until it is completely melted into a liquid, and then the heating curve progresses.

The heat of vaporization is almost always higher than the heat of fusion. This makes it takes more energy for something to boil than it takes for it to melt. This is why the vaporizing plateau is longer...it takes more time for the water to fully boil.
Think about this in terms of IMFS. During the melting phase, only some IMFs break. However, when water boils, all of them have to break, which requires more energy⚡.

How many Joules are required to change 30.0g of ice at -20°C to steam at 140°C? There are a few steps you should follow using the following given information:

There are actually 5 different (quick) calculations you must perform to calculate the answer:
Use q=mcΔT at the slopes (since there is a change in temperature) and Hf(m)/Hv(m) on the plateaus 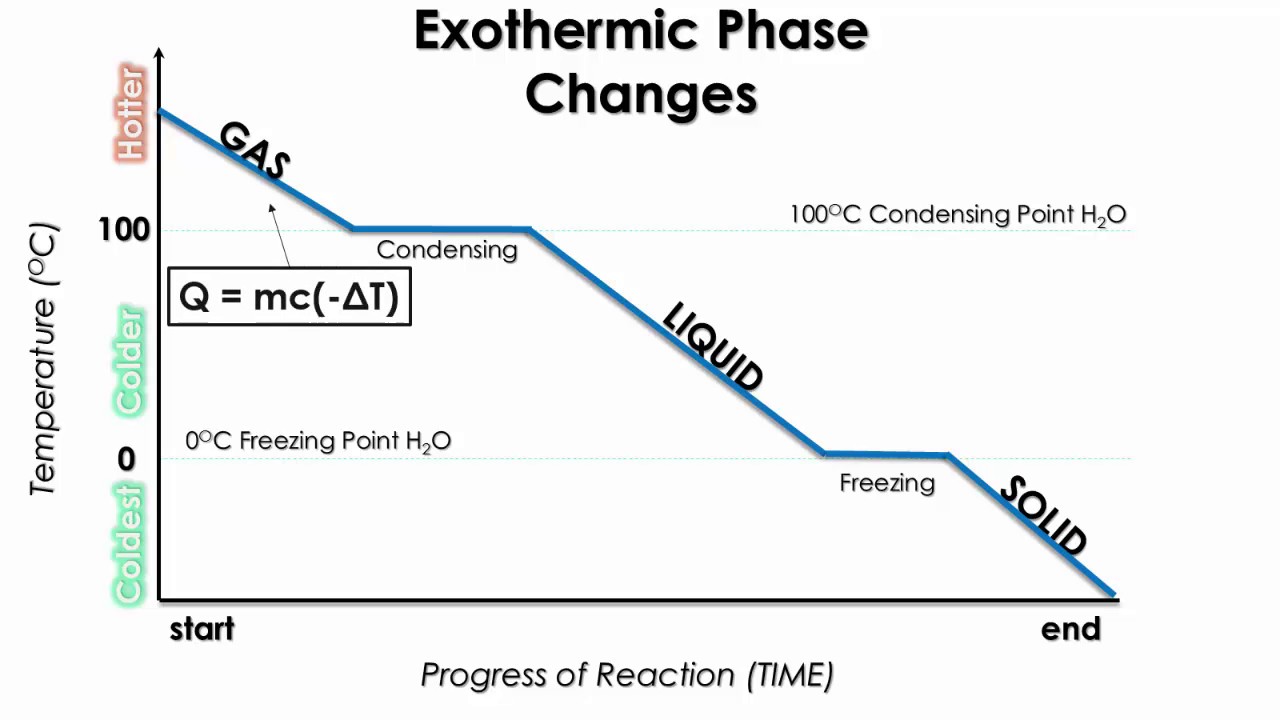 The cooling curve is the exact same as the heating curve, but it has the heats of condensation and heats of freezing instead. The heats of condensation and freezing are simply the NEGATIVES of the heats of fusion and vaporization.
Pay attention of the units that the College Board gives you. In the heating curve example, Hf and Hv were given in J/g, but they could have easily given you the units J/mol or kJ/g. Make sure you convert as necessary. For example if they gave you the molar heat capacity (with the units J/mol), convert the gram mass into moles for q=mcΔT calculations.

As we know, there are three phases of matter: solid, liquid, and gas. Many of you also may know that you can transition between the three phases through melting, boiling, condensing, or freezing. This can be seen graphically in a phase diagram:

Let's Break this Down

On the two axes, we have pressure in atmospheres and temperature in Celsius. This shows the relationship between pressure and temperature in determining which state of matter an object is in. As we increase temperature (at a sufficient pressure), we move from solid to liquid to gas, and vice versa.
There are two important points on the phase diagram, the triple point and the critical point. The triple point is a weird point where you are in all three states of matter. The critical point is a point at which past this point you can no longer have a liquid, you either have a supercritical fluid or a gas. Here's an animation showing you the triple point of water: