9.2 Technological Advances and Limitations after 1900: Disease

9.2: Technological Advances and Limitations after 1900: Disease

Like we discussed at the end of the previous key topic, 9.1: Advances in Technology and Exchange after 1900, we have made great progress in the medical field during the 21st century. In this key topic, we’ll dive deeper into what diseases we have been fighting and how we are fighting them this century! (cough COVID-19 cough 😷)

Most recently, the whole world has been fighting against SARS-COV-2/Coronavirus/COVID-19. I think we’re all very familiar with how we have been combating the disease, but sadly, the AP world history test will probably not test on the topic since, it’s too recent to be considered true history since the pandemic is still ongoing 😢
One thing that’s useful to discuss here (using COVID as the specific example for this concept) is that pandemics and epidemics create lots of urgency in the medical community to help develop vaccines or cures to fight them. We’ve seen rapid testing and growth in the use of Adenovirus (like Johnson + Johnson and AstraZeneca) and mRNA (like Pfizer and Moderna) vaccines. While you don’t need to know these terms for your AP pest, it’s a great thing to note that there are tons of different ways to fight the same virus, and vaccines can be highly effective in their purpose!
Another big pandemic during this time period was the Spanish Flu. This flu came about during World War I from a Kansas military base that was rumored to have come from foreign countries. The pandemic swept through major American cities, specifically those with military bases since that was the first primary spreader. The 1918 flu pandemic killed an estimated 195,000 Americans during October 1918 alone.
This pandemic had a second spike as the Great War ended with armistice day as husbands and wives reunited and soldiers began to demobilize. This pandemic was one of the first of this size that we began to fight with modern medicine. Although we didn’t develop a vaccine at the time to fight it, we began programs aimed to encourage washing hands, sneezing into tissues, and what we now refer to as “social distancing” in public!

In AP world history, we’ll talk about two main classifications of disease: Contagious and Chronic. Contagious diseases, as the name implies, are those that can be transmitted from one person or animal to another. Chronic diseases are basically the opposite (cannot be transmitted) and are generally seen as a result of being immune.
In MDCs, we see that chronic diseases, like heart disease, cancer, and pre-existing conditions, will cause more deaths than contagious diseases, like the flu, the common cold, meningitis, or polio. In LDCs, we generally see the opposite since the life expectancy in those countries is generally not high enough for a lot of chronic diseases that come with old age (like Parkinsons, dementia, and others) to occur widely throughout their society.
Like everything, there are some exceptions to the generalities we just discussed above. Pandemics like, in the modern day, COVID-19 or, earlier in this time period, the Spanish flu (H1N1 flu), often cause a lot of deaths in all countries around the world. Tying this back to the theme of this whole unit, globalization allows for people to travel around the globe and easily spread diseases, which can cause epidemics or pandemics.

This disease, HIV-AIDS, was first identified and researched as GRID, Gay-Related Immunodeficiency, in the later 1900s in New York City and San Francisco. The disease originated from Central Africa and spread to the US, where it found its victims primarily among gay men. Since doctors first found the disease almost always in gay men, it was first assumed to be transmitted through men having sex with men.
After people started dying from this new disease, gay men began to practice safer sex, using condoms and confining themselves to only trusted partners. Later, it came to light that GRID was not the correct name for this new disease, since it was also found to be transmitted through used needles (meaning it could be transmitted through blood).
In the 2010s, pre-exposure prophylaxis (PrEP), a medication such as Truvada, was developed. This daily drug, if taken appropriately by gay men who are sexually active, has a 99% success at preventing the transmission of HIV.
In the 21st century, HIV-AIDS is much more of a risk to people from its original hearth, Sub-Saharan Africa. Since much of the region does not use contraception for cultural or lack-of-access reasons, STIs are spread much more frequently and lead to many more deaths. There are many programs sponsored by NGOs targeted at making contraception more accessible and appealing to Sub-Saharan African nations like Zambia, Kenya, and Uganda! 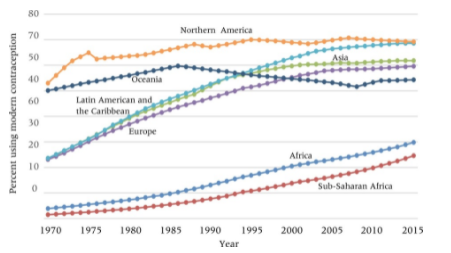 This chart from Wiley shows the rate of contraceptive usage in different regions of the world. Sub-Saharan Africa is by far the lowest percentage of people using Contraception, but numbers have been steadily increasing over the past few years!

This graphic from Freemanpedia shows the changes brought by new vaccines.

💪🏽 Are you ready for the WHAP exam?

Thousands of students are studying with us for the AP World History exam.
join now