While it may not seem so, bonds contain energy😲. When you think about why some reactions are exothermic and others are endothermic, it is because of the breaking and forming of bonds! There is a general rule here, and that is: BREAKING BONDS REQUIRES ENERGY & MAKING BONDS RELEASES ENERGY.
I have a mnemonic device you could use to make your life so much easier! BARF: Breaking Absorbing - Releasing Forming. This reiterates that when bonds are broken, energy is absorbed and when bonds form, energy is released.

Imagine a single molecule of H2. If you wanted to break that bond, you have to input energy. Think of it almost like having to snap a branch in half or stretching a rubber band until it snaps💥. In order to do this, we have to put energy into the system!

Conversely, when you form a bond, energy is released. This is because of lower potential energy at these states. This leads to excess energy being released from the system. This can be seen in the following chart: 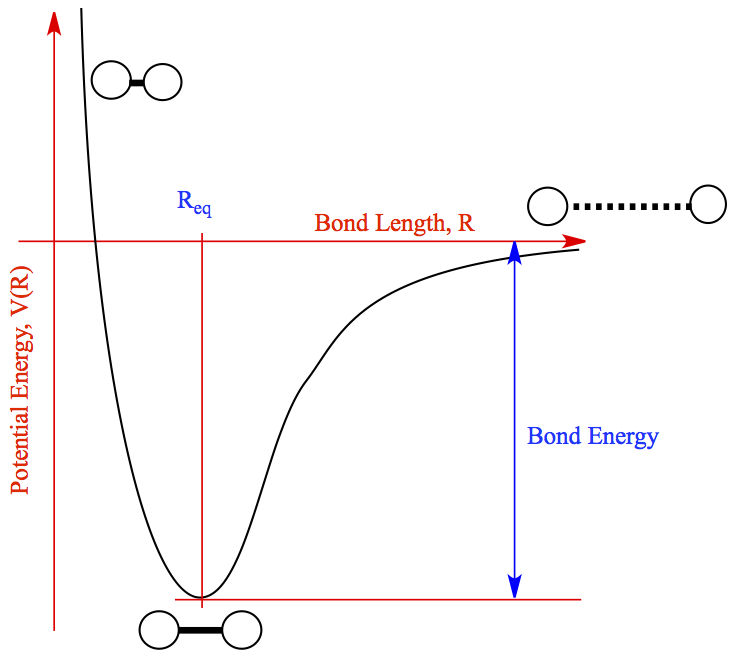 Now that we've figured out that breaking bonds takes energy and that forming bonds releases energy, let's start examining how we quantize this energy. To begin, the energy that it takes to break a specific bond is called the bond dissociation energy, or BDE. This varies from bond to bond, but there are some basic trends:

Typically, a triple bond has a higher BDE than a double bond than does a single bond. This is because simply put, there's a more robust bond to break through. This should make logical sense, though it is worth noting🧐.

To sum these facts up, shorter bonds are stronger and have a lower BDE compared to longer bonds, which are weaker and have a higher BDE.

Bond Dissociation Energy can be used to calculate the amount of energy released or absorbed during a chemical reaction. This is because of one simple principle: all a reaction is is the breaking of reactant bonds and the forming of product bonds. Therefore, we can use a simple formula:
ΔH = ΣH(broken) - ΣH(formed)
💡KNOW it's broken - formed, or reactants - products. In the next key topic, you are introduced to another formula that is products-reactants, so be careful.
When BDEs are introduced into a problem, automatically think reactants-products.

Breaking Down This Formula

We are given the following thermodynamic data: