Smog is derived from the combination of smoke and fog. It was normally seen in industrial cities due to the use of coal and factory emissions. These sulfurous (sulfur dioxide) emissions are called grey smog.

Photochemical smog (brown smog) is formed by the reaction of nitrogen oxides and VOCs with tropospheric ozone. 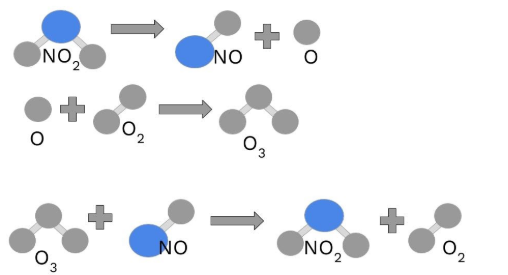 Nitrogen dioxide is from both natural and anthropogenic sources. Sunlight breaks a bond and releases one oxygen forming nitrogen oxide (NO). The lone oxygen then bonds to atmospheric oxygen (O2) with the assistance of sunlight. This forms tropospheric ozone (O3). As the sun goes down, ozone undergoes a reaction with the recently made NO resulting in NO2 and O2.

As many VOCs are from gasoline fumes, it should be understood that there is more brown smog in larger cities and warmer, sunny days. Trees are also emitters of VOCs so forested areas are also likely candidates of brown smog, though their ambient temperature is lower.

Due to the particulates and gases, smog has been linked to causing a variety of respiratory problems including asthma and bronchitis. Many people in heavily affected cities and regions in China will opt to wear surgical face masks in an attempt to lessen these health effects.