The Qualitative / Quantitative Translation is one of the 5 FRQs that appear on the AP Physics 1 Exam. This particular question is usually worth 12 points (out of a total of 45) and is suggested to take around 25 minutes to complete. The word qualitative implies the use of words. The word quantitative implies the use of mathematics. This means that a QQT is a question that requires you to go between words and mathematics in describing and analyzing a situation.

What you might be asked to do on a QQT

Evaluate a student’s words - You will be presented with a situation, a question, and one or two students’ answers or arguments over what the answer is. You will be asked to break down their reasoning, identifying each feature that is correct or incorrect. Sometimes you will have to connect the correct (or incorrect) features of arguments to physics principles or equations. After figuring out what is right and wrong, you may be asked to construct a completely correct argument based on the “rights” and “wrongs” you found. Evaluate a student’s representations - You may be shown a student’s graph or work that describes the situation, but there may be features of the graph or equation that are wrong. You will need to identify the correct or incorrect features of the graph. You may be asked to then create a correct version of their representation.

What to look for:

Things to look for when evaluating a graph:

Things to look for when evaluating equations:

Things to look for when evaluating a student’s words: 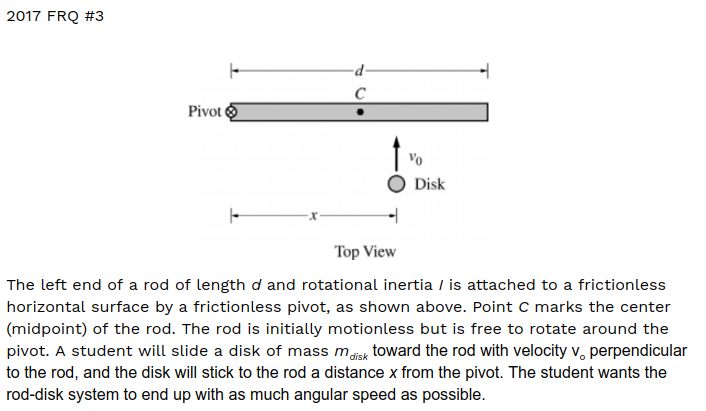 This equation agrees with my reasoning in part (a). If the distance from the pivot (x) is increased the angular speed 𝜔 increases as well.

The disk bouncing off the rod has a larger change in angular momentum than when it sticks to the rod. This results in a larger angular speed in the rod afterwards because the total angular momentum of the rod-disk system has to remain constant.

Student Y: “But you are not taking into account the direction of the friction force. In Case 1, the friction and hanging weight forces work together to create a greater net force than in Case 2. A greater net force means a greater acceleration in Case 1. If the acceleration is greater, then the tension pulling the block on the table must be greater in Case 1 as well.”

i. Which aspects of Student X’s reasoning are correct? Explain why they are correct.

Student X correctly states that both cases have the same hanging mass (shown in diagram), same force of friction on the table (Same mass on the table and same coefficient of friction, so Ff = 𝜇Fn will be the same) ii. Which aspects of Student X’s reasoning are incorrect? Explain why they are wrong.

The forces between the 2 trials are not the same. In case 1 the frictional force and the weight of the hanging block are in the same direction (right / down) and result in a larger net force. This leads to a larger acceleration for case 1. The tension on the string in case 1 is smaller, since the acceleration is greater for the hanging block (mg-T=ma) In case 2, the frictional force is to the left and is opposing the weight of the hanging block, which gives a smaller net force and acceleration. The tension is greater in case 2 as well. iii. Which aspects of Student Y’s reasoning are correct? Explain why they are correct.

Student Y correctly states that the frictional force changes direction (opposes the motion of the blocks) which gives a greater net force & acceleration in Case 1 (see reasoning in part ii for more detailed explanation) iv. Which aspects of Student Y’s reasoning are incorrect? Explain why they are wrong

Greater acceleration doesn't mean greater tension in the cord. In fact the opposite is true. Looking just at the hanging block, we can derive a Newton's 2nd Law equation to show this.